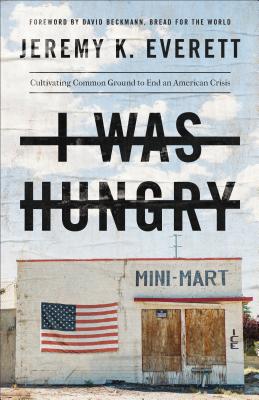 Hunger is one of the most significant issues in America. One in eight Americans struggles with hunger, and more than thirteen million children live in food insecure homes. As Christians we are called to address the suffering of the hungry and poor: "For I was hungry, and you gave me food . . ." (Matthew 25:35). However, the problems of hunger and poverty are too large and too complex for any one of us to resolve individually.

I Was Hungry offers not only an assessment of the current crisis but also a strategy for addressing it. Jeremy Everett, a noted advocate for the hungry and poor, calls Christians to work intentionally across ideological divides to build trust with one another and impoverished communities and effectively end America's hunger crisis. Everett, appointed by US Congress to the National Commission on Hunger, founded and directs the Texas Hunger Initiative, a successful ministry that is helping to eradicate hunger in Texas and around the globe. Everett details the organization's history and tells stories of its work with communities from West Texas to Washington, DC, helping Christians of all political persuasions understand how they can work together to truly make a difference.

Jeremy K. Everett (MDiv, Baylor University) is the founder and executive director of the Texas Hunger Initiative, an organization that partners with the United States Department of Agriculture, Texas state agencies, the corporate sector, and thousands of faith- and community-based organizations to develop and implement strategies to alleviate hunger through policy, education, research, and community organizing. A noted advocate for the hungry, he served on the National Commission on Hunger, has spent over two decades ministering to the poor, and frequently speaks on poverty, hunger, community development, and social entrepreneurship. Everett regularly writes for HuffPost and has been featured in PBS documentaries, in newspapers such as the Dallas Morning News, and on talk shows.
Loading...
or support indie stores by buying on