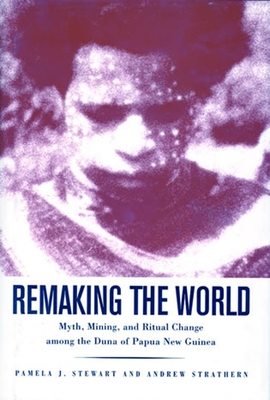 Drawing on both their own fieldwork from 1991 to 1999 and older written sources, Stewart and Strathern explore how the Duna have remade their rituals and associated myths in response to the outside influences of government, Christianity, and large-scale economic development, specifically mining and oil prospecting. The authors provide in-depth ethnographic materials on the Duna and present many detailed descriptions of ritual practices that have been abandoned. Remaking the World is a timely contribution to the literature on agency and the making of cultural identity by indigenous peoples facing economic, social, and political change.

Pamela J. Stewart is coauthor of Collaborations and Conflicts: A Leader Through Time (1999) and a research associate in the department of anthropology and the department of religious studies at the University of Pittsburgh.

Andrew Strathern is coauthor of Arrow Talk: Transaction, Transition, and Contradiction in New Guinea Highlands History (2000) and is Mellon Professor of Anthropology at the University of Pittsburgh.
Loading...
or
Not Currently Available for Direct Purchase