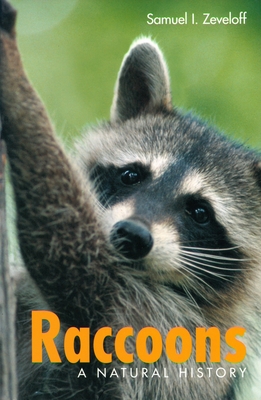 The word raccoon is drawn from the Native American Algonquian language. Their term arakun roughly translates to “he who scratches with his hands.” Anyone who has found a raccoon rummaging around in a once securely closed trash container can attest to how skillful raccoons are with their front paws. In fact, they have four times as many sensory receptors in their forepaw skin as they do in their hindpaws, a ratio similar to that of human hands and feet. Samuel Zeveloff explores this trait and much more in his accessible natural history of raccoons.

Written with the general reader in mind, Raccoons presents detailed information on raccoon evolution, physical characteristics, social behavior, habitats, food habits, reproduction, and conservation, as well as their relationship with humans and many other topics. The section on distribution and subspecies focuses on the raccoon’s current range expansion, and the material on their cultural significance demonstrates this mammal’s unique status in different North American cultures.

Dr. Samuel I. Zeveloff is a professor of zoology at Weber State University in Ogden, Utah. He is the author of the book Mammals of the Intermountain West (University of Utah Press, 1988) and the senior editor of two other volumes on wilderness issues. He received a Ph.D. in zoology from the University of Wyoming.
Loading...
or
Not Currently Available for Direct Purchase