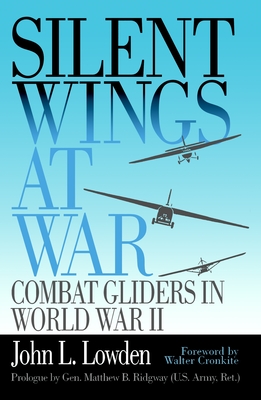 The pilots were known as “suicide jockeys” and the aircraft they flew were called “flak bait.” Towed behind modified bombers or transport aircraft, Allied combat gliders were used in some of the riskiest missions of World War II, landing miles behind enemy lines with specially trained assault forces. In Silent Wings at War, John L. Lowden combines his own recollections with those of fellow veterans to create a vivid, gritty, jocose memoir of war as he and other glider pilots and their passengers knew it. These true tales of courage, as well as command blunders, make a substantial contribution to WWII literature.

“The book is great.”—Walter Cronkite

“Weaving his own often hair-raising experiences and those of thirty-nine other veterans into the narrative, Lowden chronicles the use of Allied gliders in seven major airborne assaults.”—American History Illustrated

“The best and most complete portrayal of [glider] airborne action I have seen.”—George Van Fleet (Lt. Col., USAF, Ret.)

John L. Lowden flew as a second lieutenant in the 1st Allied Airborne Army in Europe during World War II. His awards include the Air Medal with Bronze Oak Leaf Cluster, the Presidential Unit Citation, the Bronze Arrowhead of initial assault troops, and seven unit battle stars. He lives in Wilmington, N.C.
Loading...
or support indie stores by buying on