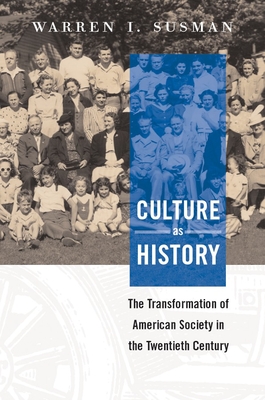 The Transformation of American Society in the Twentieth Century

With amazing creativity, clarity, and wit, Warren Susman (1927-1985) takes us on a provocative tour of the highlights of American culture. By looking at all types of 20th-century culture—highbrow, lowbrow, and middlebrow—Susman shows how culture itself has become a battleground for competing visions of American life. Fourteen essays include such topics as the nature of American conservatism, the cultural contradictions of a consumer society, and the role of the urban experience in the development of American culture.

Praise For Culture as History: The Transformation of American Society in the Twentieth Century…

“The book does provide a good sense of many of Susman’s concerns and virtues: his attentiveness to the ways in which Americans have used and abused their past, his ability to combine a deeply radical sensibility with an appreciation of the conservative tradition, and his fine grasp of the ambivalence with which Americans greeted modernity in the first half of the 20th-century.”—Robert Westbrook, professor of History, University of Rochester, from Reviews in American History

WARREN SUSMAN (1927-1985) was a professor of history at Rutgers University.
Loading...
or
Not Currently Available for Direct Purchase