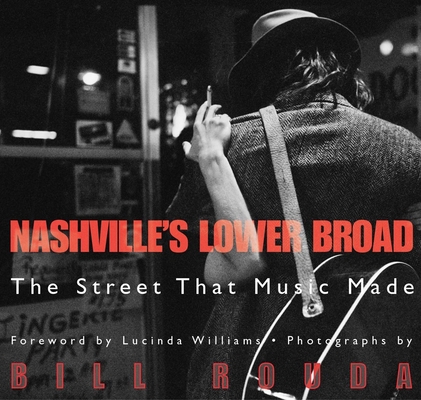 The Street That Music Made

Like Beale Street in Memphis and Bourbon Street in New Orleans, Lower Broadway was the heart of the country music scene in Nashville, the place where locals could rub elbows with stars and impromptu jam sessions could last late into the night. But after the Grand Ole Opry moved out of the Ryman Auditorium in the 1970s, Lower Broad deteriorated into a down-and-out skid row. When the Ryman’s reopening and urban gentrification started bringing people—especially tourists—back to Lower Broad in the 1990s, locals fought to retain some of its old-time authenticity. Bill Rouda’s evocative photographs capture the return of the spirit of real country music in honky-tonks like Tootsie’s Orchid Lounge and Robert’s Western World. Here bands like the hip, retro BR549 played for tips while fans danced the night away, ignoring the shadows of the newly constructed convention center and the glare of Planet Hollywood. Rouda’s photographs also capture legends like Kris Kristofferson and Willie Nelson and attest to the true heart and soul of country music.

Bill Rouda, a commercial and documentary photographer, lives in North Carolina. Lucinda Williams is a Grammy Award-winning singer and songwriter. David Eason is a professor of journalism at Middle Tennessee State University.

Praise For Nashville's Lower Broad: The Street That Music Made…

“Black-and-white and slightly, artfully soft-focused, [Rouda's photographs] depict a gritty place, where whiskery ‘Blue-Eyed John’ drains a pint in front of the Turf in broad daylight and bar proprietor Miss Pat posts etiquette instructions over the urinal that conclude, ‘Do not tear this sign off wall or I will kill you.’ . . . . [an] outstanding photo-essay and fine work of Americana.”—Ray Olson, Booklist
or
Not Currently Available for Direct Purchase
Copyright © 2020 American Booksellers Association