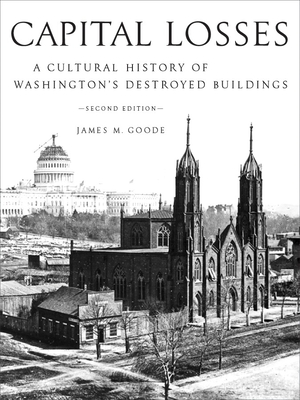 Before the passage of critical preservation legislation in 1978, the Nation's Capital lost an irreplaceable assembly of architecturally and culturally significant buildings. Wanton destruction in the name of progress—particularly in the decades immediately following World War II—resulted in a legacy forever lost, a cultural heritage destroyed by the wrecker's ball. By reminding us of things lost, James Goode's magisterial and poignant study represented a comprehensive call for action, a mandate for responsible stewardship of the architectural legacy of Washington, DC. Both the familiar public Washington of official landmarks and the private city of residential neighborhoods are paid tribute in this volume, dedicated to the vanished.

At once a visual delight, a fascinating social history, and an eloquent appeal for ongoing awareness, Capital Losses reveals the Washington that was and how it became what it is today. This updated edition includes eighteen more treasures lost and ninety additional historic photographs.

“One of the best books of its kind ever put together.”—Washingtonian

“The most lavish look at any American city's lost architecture that has yet appeared.”—The Washington Star

“The stories . . . are as good as anyone’s gothic novel.”—Washington Post Book World

James Goode is the winner of Washingtonian magazine's prestigious “Washingtonian of the Year” award. He is the author of Best Addresses: A Century of Washington's Distinguished Apartment Houses and lives in Washington, DC.
Loading...
or
Not Currently Available for Direct Purchase