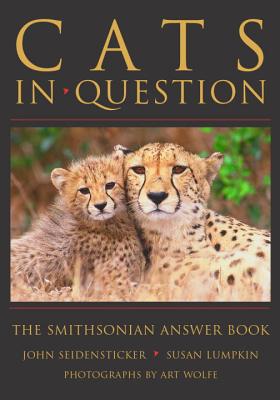 What are cats? How do cats hunt? Do wild cats like catnip? Do cats dream? Cats in Question, a new book in Smithsonian's highly successful “In Question” series, offers authoritative and engaging answers to the thousands of questions about cats that Smithsonian scientists receive annually. All of the world’s cats are here, from fearsome predators such as lions and tigers, to mysterious hunters such as leopards and jaguars, to cuddly pets such as domestic cats. More than 100 breathtaking photographs by acclaimed photographer Art Wolfe illustrate the questions on cat facts, cat evolution and diversity, and cats and humans.

JOHN SEIDENSTICKER, a Smithsonian scientist who has studied cats for more than 30 years, is recognized as the world's leading authority on cats. SUSAN LUMPKIN is director of communications and editor of ZooGoer magazine at Friends of the National Zoo. Together they wrote The Smithsonian Book of Giant Pandas, Cats and Wild Cats, and several children's books. They live in Washington, DC. ART WOLFE is renowned worldwide for the mastery of color, composition, and perspective that his photographs display. Among his published books are The Living Wild, The High Himalaya, and Africa. He has received many awards, including the Audubon Society's Rachel Carson Award, the Alfred Eisenstaedt Magazine Photography Award, and Photographer of the Year by Photo Media magazine.
or
Not Currently Available for Direct Purchase
Copyright © 2020 American Booksellers Association