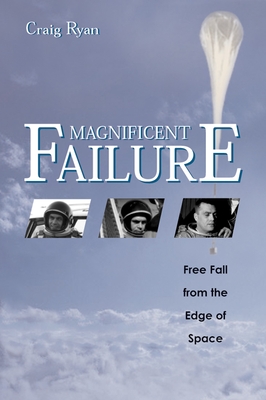 Free Fall from the Edge of Space

Locked in a desperate Cold War race against the Soviets to find out if humans could survive in space and live through a free fall from space vehicles, the Pentagon gave civilian adventurer Nick Piantanida’s Project Strato-Jump little notice until May Day, 1966. Operating in the shadows of well-funded, high-visibility Air Force and Navy projects, the former truck driver and pet store owner set a new world record for manned balloon altitude. Rising more than 23 miles over the South Dakota prairie, Piantanida nearly perished trying to set the world record for the highest free fall parachute jump from that height. On his next attempt, he would not be so lucky. Part harrowing adventure story, part space history, part psychological portrait of an extraordinary risk-taker, this story fascinates and intrigues the armchair adventurer in all of us.

Praise For Magnificent Failure: Free Fall from the Edge of Space…

Author of The Preastronauts, Craig Ryan lives in Oregon.
Loading...
or
Not Currently Available for Direct Purchase