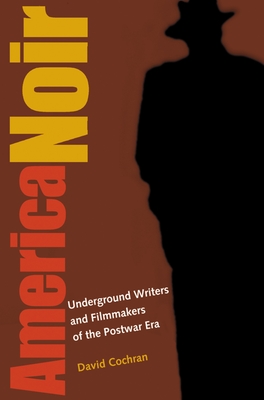 Underground Writers and Filmmakers of the Postwar Era

In America Noir David Cochran details how ten writers and filmmakers challenged the social pieties prevalent during the Cold War, such as the superiority of the American democracy, the benevolence of free enterprise, and the sanctity of the suburban family. Rod Serling's The Twilight Zone featured victims of vast, faceless, bureaucratic powers. Jim Thompson's noir thrillers, such as The Grifters, portrayed the ravages of capitalism on those at the bottom of the social ladder. Patricia Highsmith, in The Talented Mr. Ripley, placed an amoral con man in an international setting, implicitly questioning America's fitness as leader of the free world. Charles Willeford's pulp novels, such as Wild Wives and Woman Chaser, depicted the family as a hotbed of violence and chaos.

These artists pioneered a detached, ironic sensibility that radically juxtaposed cultural references and blurred the distinctions between “high” and “low” art. Their refusal to surrender to the pressures for political conformity and their unflinching portrayal of the underside of American life paved the way for the emergence of a 1960s counterculture that forever changed the way America views itself.

Praise For America Noir: Underground Writers and Filmmakers of the Postwar Era…

“A must for any serious student of noir tradition in American culture. . . . Entertaining and enlightening.”—BookPage

“Insightful . . . a welcome addition to the literature devoted to postwar culture.”—American Studies International

“Demonstrates . . . an obsessive knowledge of and contagious enthusiasm for its subject.”—Modern Language Notes

David Cochran earned his PhD in American history from the University of Missouri-Columbia. He currently teaches at John A. Logan College and lives with his wife, three children, and four cats in Herrin, Illinois.
Loading...
or support indie stores by buying on