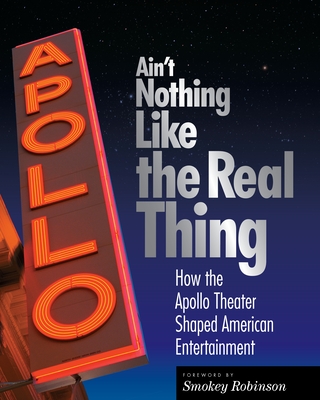 The Apollo Theater and American Entertainment

Ain't Nothing Like the Real Thing: How the Apollo Theater Shaped American Entertainment celebrates the seventy-five year history of the Apollo Theater, Harlem's landmark performing arts space and the iconic showplace for the best in jazz, blues, dance, comedy, gospel, R & B, hip-hop, and more since it opened its doors in 1934. This beautifully illustrated book is the companion volume to an exhibition of the same name, organized by the Smithsonian's National Museum of African American History and Culture in collaboration with the Apollo Theater Foundation. It offers a sweeping panorama of American cultural achievement from the Harlem Renaissance to the present through the compelling story of a single institution.

Ain't Nothing Like the Real Thing brings together a diverse group of twenty-four writers to discuss the theater's history and its intersection with larger social and political issues within Harlem and the nation. Featuring more than 300 photographs, this volume brings to life the groundbreaking entertainers in music, dance, and comedy—Duke Ellington, Louis Armstrong, Ella Fitzgerald, Billie Holiday, Smokey Robinson, Aretha Franklin, The Supremes, James Brown, Moms Mabley, Redd Foxx, Honi Coles, and Savion Glover, to name a few—who made the Apollo the icon that it is today. The Apollo Theater has been the setting for soaring achievement and creativity in the face of enormous challenges. In telling this truly American story, Ain't Nothing Like the Real Thing is a celebration of the lasting contributions of African Americans to the nation's cultural life.

Praise For Ain't Nothing Like the Real Thing: The Apollo Theater and American Entertainment…

This volume--and the 2011 exhibition at the National Museum of African American History and Culture it catalogs--celebrates the history of the Apollo Theater, one of Harlem's most famous attractions. The book is divided into five major sections, which deal with the growth of Harlem in 1914, the Apollo from its birth to the 1940s, the golden years of the 1950s-60s, changes in the 1970s-80s, and the theater's rebirth in the 2000s. Each chapter looks at the entertainers of the era who starred at the Apollo and includes a "spotlight section" on a significant performer (these range from Bessie Smith to Savion Glover). For those born after 1990, the book serves as an excellent account of the civil rights era and the struggle for acceptance of black artists in the US. Entertainers covered include Cab Calloway, Ella Fitzgerald, Duke Ellington, Moms Mabley, Smokey Robinson, Redd Foxx, Richard Pryor, James Brown, the Jackson 5, and many more. This beautifully illustrated book is a welcome addition to the study of African American performers and their impact on the US as a whole. Summing Up: Highly recommended. All readers. -- M. D. Whitlatch, Buena Vista University

Here, 26 historians, performers, and critics each describe a part of Apollo Theater history, share their own experience, or spotlight a performer. The Apollo's significance in popular culture and social history is undeniable; performers who survived the critical audience either became stars or got even more famous than they'd been. The list of performers gracing the stage dates back to 1934 and includes the likes of Ella Fitzgerald, "Moms" Mabley, and Cab Calloway. This book—a companion to the 75th-anniversary traveling exhibition of the same name, which begins at the Smithsonian's National Museum of African American History and Culture (Apr. 23–Aug. 29, 2010)—is rich in detail and features photos, playbills, and the occasional index card containing longtime Apollo owner Frank Schiffman's critiques of performers. VERDICT For readers with an interest in popular music, New York history, or African American history.—Brian Sherman, McNeese State Univ. Lib., Lake Charles, LA


The Apollo Theater has provided a stage for performers and a setting for the creativity of black American music that has hugely influenced American music in general. Recognizing the seventy-fifth anniversary of the Apollo Theater, this book offers essays by entertainment historians, critics, and journalists chronicling the legacy of the storied theater. The Apollo opened in Harlem in 1934 when black musicians faced severe limitations on where they could perform and how far their careers might go. Long before American Idol, the Apollo was offering a chance for talented amateurs to launch their careers, among them, Ella Fitzgerald, Sarah Vaughan, James Brown, Dionne Warwick, the Jackson Five, and others. Contributors recall memorable performances, tributes, and rallies, including a celebration of the election of Barack Obama. Photographs enhance this history of the Apollo, which is set against the backdrop of historical changes in musical styles and genres, from burlesque to bebop to rhythm and blues to hip hop, as well as the social and racial changes as segregation ebbed and black music went mainstream. Music lovers and historians will appreciate this tribute. --Vanessa Bush

“In the heart of Harlem since 1934, the Apollo Theater has proudly stood as the center of the black renaissance movement, a beacon for the cultural history of our people and as important to the world's cultural lexicon as New York's Carnegie Hall, Milan's La Scala Opera House, or Paris's Olympia Theater. Jazz, blues, big-bands such as Ellington's and Basie's, and R & B are America's only indigenous music and the heart and soul of all popular music. Nowhere were they displayed more exuberantly than on the hallowed stage of the Apollo. For seventy-five years the Apollo has stood as the flagship of that legacy, playing an indelible role in building, celebrating, preserving, and promoting our nation's cultural heritage. Those who need proof of that fact can find it right here in this book.”—Quincy Jones, Composer, producer

“This book is nothing short of a treasure trove—a vivid reminder of the years I spent on the Apollo Theater stage, getting my act together and learning alongside show-business legends such as Louis Armstrong, Ella Fitzgerald, and Dinah Washington. It's a joy to know that the world can finally hear the story of a theater that holds such an honored spot in American culture.”—Leslie Uggams, Emmy Award-winning vocalist

“The Apollo Theater has been a part of my life since my mother took me to see James Brown there at a matinee show when I was four years old. I've seen everything from soul to hip-hop, from rallies to movie premieres at that venerable building. This book captures the flavor of one of the most important entertainment venues in America.”—Nelson George, Author, journalist, and filmmaker

“Though the definitive history of American entertainment is, by necessity, a work in progress, much of it is laid out on the pages of this remarkable book. Entertainers of all types—musicians, dancers, and comedians—found a safe home and loyal audiences at the Apollo Theater and made Harlem's 125th Street world-famous. This stellar collection of essays addresses why that happened and what it menas. It makes for a thrilling story.”—Judith Jamison, Artistic Director, Alvin Ailey American Dance Theater

Richard Carlin is a music writer and editor. He is the author of Words of Sound: The Story of Smithsonian Folkways and general editor of the Facts on File Encyclopedia of American Popular Music, among other works. He is currently executive editor for college music textbooks at Pearson/Prentice Hall.

Kinshasha Holman Conwill is deputy director of the Smithsonian's National Museum of African American History and Culture. The former director of the Studio Museum in Harlem, she has organized more than forty exhibitions and writes frequently on art and museum management.
Loading...
or
Not Currently Available for Direct Purchase