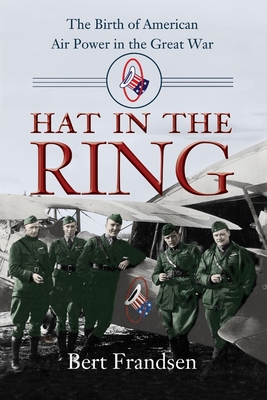 Hat in the Ring

The Birth of American Air Power in the Great War

When Congress declared war in April 1917, the Europeans had already deployed their third generation of fighters, equipped with machine guns and capable of speeds in excess of 100 miles per hour, while the American Air Service consisted of only a handful of aviators in unarmed trainers. In this first in-depth study of America's first air warriors, Frandsen shows how in just two years the 1st Pursuit Group organized, absorbed French and British technology and experience, and became a well-led, respected, and lethal force over the trenches of the Western Front.

Fascinating portraits of America’s first aviation leaders and legends, including Eddie Rickenbacker, Billy Mitchell, Frank Luke, Benjamin Foulouis, Bert Atkinson, and James Meissner, provide new and controversial perspective on one of America’s least understood wars and on the origins of the most powerful air force in history. Toxic personalities, competing French-British tactics and aircraft, and an experienced, aggressive enemy forced the Americans into a tactical crucible with deadly results, including 73 casualties in the Meuse-Argonne campaign alone.

Bert Frandsen has a Ph.D. in the history of technology from Auburn University and is an assistant professor of joint warfare studies at the USAF Air Command and Staff College. He lives in Alabama.
Loading...
or support indie stores by buying on