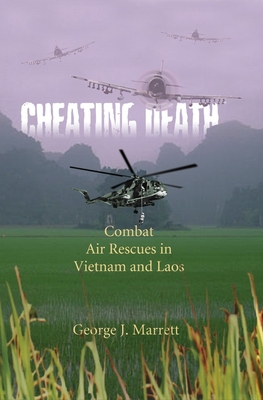 They flew low and slow, at treetop level, at night, in monsoons, and in point-blank range of enemy guns and missiles. They were missions no one else wanted, but the ones all other pilots prayed for when shot down. Flying the World War II-vintage Douglas A-1 Skyraider, a single-engine, propeller-driven relic in a war of “fast-movers,” these intrepid US Air Force pilots, call sign Sandy, risked their lives with every mission to rescue thousands of downed Navy and Air Force pilots.

With a flashback memory and a style all his own, George J. Marrett depicts some of the most dangerous aerial combat of any war. The thrilling rescue of “Streetcar 304” and William Jones's selfless act of heroism that earned him the Medal of Honor are but two of the compelling tales he recounts. Here too are the courages Jolly Green Giant helicopter crews, parajumpers, and forward air controllers who worked with the Sandys over heavily defended jungles and mountains well behind enemy lines.

Passionate, mordantly witty, and filled with heart-pounding adrenaline, Cheating Death reads like the finest combat fiction, but it is the real deal: its heroes, cowards, jokers, and casualties all have names and faces readers will find difficult to forget.

“It is a great read for everyone and a must book for all aviation enthusiasts.”—C. E. “Bud” Anderson, World War II triple ace and author of To Fly and Fight

“‘That others may live’ was their motto and each of us who flew in that war knew should our luck run out they would be there. I cannot recount the times pilots were plucked out of enemy territory, or out of the jungle trees of Laos by those brave men whose call signs were Sandy and Jolly Green. Often they gave their own lives to save another. Greater love hath no man than that. To each of them I give my everlasting respect, admiration, and deep affection. Reach into your hearts as you read this book and understand the lengths to which men can love and support one another in the times of stress. It will make you just a bit prouder to be an American.”—Robin Olds, retired general and triple ace

George J. Marrett flew 188 combat missions on the Douglas A-1 Skyraider in Vietnam and tested more than forty types of military aircraft in twenty-five years as a test pilot for the Air Force and Hughes Aircraft Company. He lives in California.
Loading...
or support indie stores by buying on