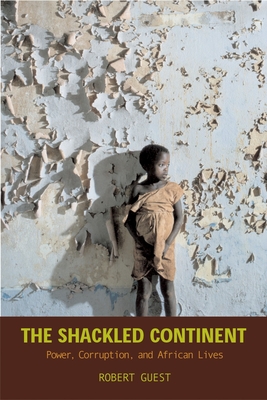 A former Africa editor for The Economist, Robert Guest addresses the troubled continent's thorniest problems: war, AIDS, and above all, poverty. Newly updated with a preface that considers political and economic developments of the past six years, The Shackled Continent is engrossing, highly readable, and as entertaining as it is tragic.

Guest pulls the veil off the corruption and intrigue that cripple so many African nations, posing a provocative theory that Africans have been impoverished largely by their own leaders' abuses of power. From the minefields of Angola to the barren wheat fields of Zimbabwe, Guest gathers startling evidence of the misery African leaders have inflicted on their people. But he finds elusive success stories and examples of the resilience and resourcefulness of individual Africans, too; from these, he draws hope that the continent will eventually prosper. Guest offers choices both commonsense and controversial for Africans and for those in the West who wish Africa well.

Praise For The Shackled Continent: Power, Corruption, and African Lives…

“Rarely does an author combine experience, common sense and humour when writing about Africa. It's even rarer when the analysis is as hard-hitting as in the writing of Robert Guest.” Roger Bate, Wall Street Journal.

“I doubt whether there is a better brief introduction to the travails of modern Africa and their causes.” Anthony Daniels, Sunday Telegraph.

"An excellent book. Timely, provocative and written throughout with a passion for Africa and Africans." Bob Geldof

“astute and clever…[Guest has] an extremely strong and rationalist grasp of the present, and travels with the classical economists David Ricardo and Adam Smith as inspiration. The Shackled Continent is a lively and provocative read.” RW Johnson, Sunday Times.

“[Guest] is a lively and observant reporter. He portrays, with humour and some compassion, how nothing really works in most African countries.
The reader can learn much from this lively and outspoken book.” Anthony Sampson, The Guardian.

“Anyone who wants to be reminded of the horrors of Africa, economic or otherwise, will be interested to read this intelligent but light treatise.” Christopher Ondaatje, Literary Review.

“It seems odd that Robert Guest causes as much trouble as he does. The 33-year old Africa editor of the influential Economist magazine is personable, witty [and] eminently reasonable. But [he] brings people’s blood to boiling point quicker than one can say The Shackled Continent.”
Jeremy Gordin, The Star, South Africa.

“This is the kind of book you read holding your nose. Even H.M. Stanley, the British journalist/explorer who lived fat on the weird stories about Africa he published in his journals, [would have been] ashamed of some of the views expressed by Guest.” Osei Boateng, New African.


“This is the book for those who despair for Africa, but even more, it is the book for those who despise Africa. [Guest's writing reveals] his journalist's determination to unravel Africa's complicated, seemingly intractable problems and his economists' determination to rectify them. . . . You can't know how cynical and complacent you've become about the world's problems until you take this journey with Robert Guest.”—Debra Dickerson, author of The End of Blackness: Returning the Souls of Black Folk to their Rightful Owners.

“Guest recognizes that the economic modernization he advocates comes with a price, but he is nonetheless optimistic. Readers may be moved enough to find ways of being so, too.”—Publishers Weekly

Robert Guest is a Washington correspondent for The Economist and regularly appears on CNN and the BBC. Previously, he covered Africa for seven years, based in London and Johannesburg. He has also worked as a correspondent in Tokyo and a freelance writer in South Korea. He lives in Washington, DC.
Loading...
or
Not Currently Available for Direct Purchase