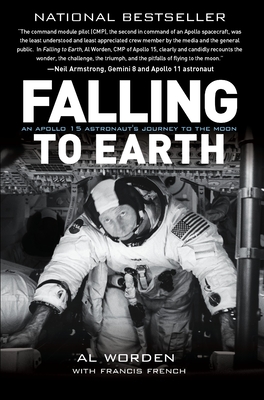 An Apollo 15 Astronaut's Journey to the Moon

As command module pilot for the Apollo 15 mission to the moon in 1971, Al Worden flew on what is widely regarded as the greatest exploration mission that humans have ever attempted. He spent six days orbiting the moon, including three days completely alone, the most isolated human in existence. During the return from the moon to earth he also conducted the first spacewalk in deep space, becoming the first human ever to see both the entire earth and moon simply by turning his head. The Apollo 15 flight capped an already-impressive career as an astronaut, including important work on the pioneering Apollo 9 and Apollo 12 missions, as well as the perilous flight of Apollo 13.

Nine months after his return from the moon, Worden received a phone call telling him he was fired and ordering him out of his office by the end of the week. He refused to leave. What happened in those nine months, from being honored with parades and meetings with world leaders to being unceremoniously fired, has been a source of much speculation for four decades. Worden has never before told the full story around the dramatic events that shook NASA and ended his spaceflight career. Readers will learn them here for the first time, along with the exhilarating account of what it is like to journey to the moon and back. It's an unprecedentedly candid account of what it was like to be an Apollo astronaut, with all its glory but also its pitfalls.

Praise For Falling to Earth: An Apollo 15 Astronaut's Journey to the Moon…

“The command module pilot (CMP), the second in command of an Apollo spacecraft, was the least understood and least appreciated crew member by the media and the general public.  In Falling to Earth, Al Worden, CMP of Apollo 15, clearly and candidly recounts the wonder, the challenge, the triumph, and the pitfalls of flying to the moon.”

“Ever wonder what it would be like to spend several days orbiting the moon—alone?  Al Worden’s expressive description of his Apollo 15 mission takes you there, and then on the 250,000-mile return, falling to Earth.  This is not just another space mission book.  In his intense, tell-it-as-he-sees-it style, Worden details what led to that wondrous experience and all that followed.”

"The space program first rewarded, and then punished, Al Worden—and he is better for it, as this exceptional book reveals.  It’s the full story, told with clarity, insight, and humor, altogether a wonderful read.”

"A rip-roaring adventure—a wry and fascinating chronicle of a time when we actually knew how to fly people to the moon."

“Al Worden does a fine job telling his interesting life story, his important role as the command module pilot for the highly successful Apollo 15 flight—and his abrupt firing as a NASA astronaut. The ins and outs of this latter story and his personal fall to Earth make for especially fascinating reading.”

“The talented men who made the pioneering flights to the moon were test pilots and scientists, team players and egomaniacs, goodie two-shoes and skirt-chasers, all driven by a shared goal—to go higher, faster, further than anyone in history. Al Worden was one of the best of this elite group: the first rookie astronaut to be entrusted with the tricky job of flying an Apollo command module, and ultimately a member of Apollo 15, the most scientifically productive lunar mission. His story, written with noted space historian Francis French, is a worthy companion to Tom Wolfe’s The Right Stuff.

--Michael Cassutt, co-author of Deke! and We Have Capture

"Very few of us flew to the moon, and the stories we brought back with us are special, treasured, and unique. Al is both a pilot and a poet, and his honest portrayal of our exhilarating adventures will move and excite a whole new generation."
Buzz Aldrin, Gemini 12 and Apollo 11 astronaut, author of Magnificent Desolation: The Long Journey Home from the Moon

With the assistance of space historian French (co-author: In the Shadow of the Moon: A Challenging Journey to Tranquility, 1965-1969, 2007, etc.), astronaut Worden, commander of the Apollo 15 module, writes that “it is time to…set the record straight” about the scandal that ended his career in space flight.

The author flew under Colonel Dave Scott with Jim Irwin on the successful 1971 NASA trip to the Moon. When they returned to Earth, the crew found themselves in the midst of a scandal, accused of being paid to take souvenir items into space. Although they denied this, they were grounded from then on. By the summer of 1972, the U.S. Senate was involved, and Congresswoman Leonor Sullivan wanted to know “what's going on at NASA.” They were never charged with violating law or NASA regulations, but it took years for the three flyers to get their good names back. Worden, now in his 70s, has a record that speaks for itself. He is one of “only 24 humans” who have left Earth’s orbit and gone to the Moon. The author describes how astronauts need courage and skill to fly on the Apollo missions and how they had to be prepared to deal with the unexpected: “We focused on the events that could kill us and prepared for them.” Apollo 15, with its on-board instruments and cameras, brought back a treasure trove of data, but they faced many potentially dangerous situations including fragments of broken glass in the weightless environment of the landing module. Worden now helps the Astronaut Scholarship Foundation fund the training of future science and technology students.

On his journey, the author “discovered far more” about the Earth, not only from space, but also in the time and effort spent vindicating himself from what appears to have been an unfair scapegoating.

Nine months after Worden’s (Hello Earth: Greetings from Endeavour) return to Earth, NASA management moved him permanently out of the astronaut office for allegedly profiteering from spaceflight. In this autobiography, he addresses the accusations and how he cleared his name. His focus, however, is on the first half of his life, from childhood to his departure from the Houston space center; he dispatches the last 40 years in two short chapters. The book’s highlight is a detailed and fascinating account of training for and successfully completing the first longer-stay lunar mission. Although Worden clearly regrets sacrificing his marriage for his career, kicks himself for getting involved in questionable financial deals, and obviously has mixed feelings about his former mission commander, he doesn’t dwell on the details or on his emotions. In a low-key conclusion, the author claims he is reconciled with most of his astronaut peers and on better-than-ever terms with NASA. VERDICT A good, occasionally blunt read and a worthy newcomer to the ever-popular genre of astronaut memoirs. Anyone interested in the space program will enjoy Worden’s reminiscences.—Nancy R. ­Curtis, Univ. of Maine, Orono

Apollo 15 astronaut Worden belongs to one of the most exclusive clubs in the world: men who made it to the moon. His recollections of events leading up to a three-day solo lunar orbit as well as the heady days of the Apollo program would be fascinating enough, but Worden is also the astronaut whom NASA shrouded in a cloud of suspicion. Few people have known why until now, when this caustic, no-holds-barred, former test pilot tells all. What readers will discover is less tabloid tawdriness than controversy surrounding the rare and valuable stamps, or postal covers, that have flown in space. With NASA now officially flying covers onboard shuttle missions, what happened to the Apollo 15 crew seems almost funny. But it had a real impact on careers and friendships, and Worden sheds invaluable light on how much risk we ask our heroes to endure in exchange for little compensation. Worden is eloquent, witty, and brutally honest, still in awe of the company he kept and the history he belongs to. A solid addition to space-literature collections. — Colleen Mondor

AL WORDEN served as a support crew member for Apollo 9, backup command module pilot for Apollo 12, and command module pilot for Apollo 15's mission July 26 - August 7, 1971. After retirement from active duty in 1975, Worden spent years in private industry before becoming the Chair of the Astronaut Scholarship Foundation.  He lives in Vero Beach, Florida. FRANCIS FRENCH is director of education for the San Diego Air & Space Museum and co-author of the award-winning books Into that Silent Sea and In the Shadow of the Moon.
Loading...
or support indie stores by buying on