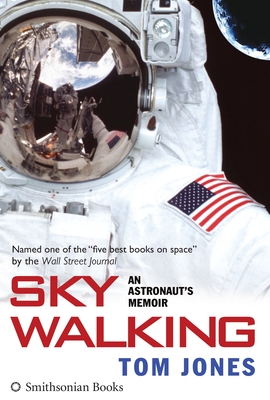 A gripping first-hand account of life in space and the making of an astronaut. What is it like to fly the space shuttle and work on and in the International Space Station? Veteran NASA astronaut Tom Jones is uniquely qualified to give the details: he flew four shuttle missions and led three space walks to deliver the US Lab to the Station. . From B-52 pilot during the Cold War, to a PhD in planetary science, to the unbelievable rigors of astronaut training, his career inevitably pointed him toward the space shuttle. Until the Challenger exploded. Jones's story is the first to candidly explain the professional and personal hardships faced by the astronauts in the aftermath of that 1986 tragedy. He certainly has 'The Right Stuff' but also found himself wondering if the risks he undertook were worth the toll on his family. Liftoffs were especially nerve-wracking (his mother, who refuses to even get on a plane, cannot watch) but his 53 days in space were unforgettable adventures. Jones uses his background as a scientist to explain the practical applications of many of the shuttle's scientific missions, and describes what it's like to work with the international crews building and living aboard the space station. Tom Jones returned from his space station voyage to assess the impact of the 2003 Columbia tragedy, and prescribes a successful course for the U.S. in space. Stunning photographs, many taken in space, illustrate his amazing journey.

Publishers Weekly
With humanity and passion (and less swagger than Mike Mullane), Jones powerfully brings to life the world of the modern NASA astronaut. Confined to low Earth orbit, no longer tasked with high-profile trips to the Moon, a small corps of dedicated professional space travelers work on serious science and dream of the day they will fly into space. Countless on-the-ground training hours prepare the astronauts for the rigors of space travel—practicing an extravehicular space walk in a 10-million-gallon tank or being flung around in a 100,000-horsepower centrifuge to acclimate to the eight g's of force experienced on lift-off. A tested B-52 bomber pilot and planetary scientist, Jones still feels and expresses wonder at space flight: "I was thirty-nine when I stepped out on the pad [in 1994] with the rest of the crew, but I gazed up at Endeavor with a child's amazement.... I shivered with excitement at the sight of my now-ready spaceship." While the twin tragedies of Challenger and Columbia hang over the story like a pall, Jones still manages to fire the spirit and invite the reader to imagine a place for humankind beyond planet Earth. (Feb.)
Copyright © Reed Business Information, a division of Reed Elsevier Inc. All rights reserved.

Booklist
Jones' memoir of his work as an astronaut in the 1990s is an unusually expressive contribution to the spaceflight genre. His descriptions of launches and landings--Jones made four of each in the space shuttle--are as engrossing as any in the literature, as is his appreciation for the extreme peril facing those who volunteer to ride a rocket into space. So why do they? Jones' personal explanations are probably typical: NASA's 1960s missions excited and intrigued him, and he ascended the aerospace technology career ladder by flying B-52s, earning a doctorate, doing engineering for the CIA, and joining NASA. Clearly professional advancement is one motivation, but the exhilaration of being in space, and the spectacular extraterrestrial vistas it affords, remains an inspiration self-evident in Jones' account. Still, being a meticulous technologist is the sine qua non of the astronaut, and lies behind the author's recurring comment that his greatest anxiety was not the prospect of death but making a mistake in his tasks. Jones will claim space buffs with his frankness and jargon--free fluency. Gilbert Taylor
Copyright © American Library Association. All rights reserved

“A‘tell it like it is’ flight crew report of living and working in space . . . An inside story—well told!” Neil Armstrong

“…Tom Jones got to live the dream. Here is his extraordinary story, told with vivid clarity, candor, and style.” Andrew Chaikin, author of A Man on the Moon

“I can recommend no better read for the armchair astronaut than Sky Walking!” Homer Hickam, author of Rocket Boys

“Tom Jones has set the benchmark for [describing life as] an astronaut in the shuttle era.” Bruce Betts, Planetary Report

Born and raised in Maryland, Tom Jones is a Distinguished Graduate
of the United States Air Force Academy. During his career, he has piloted B-52s,
earned a doctorate in planetary science, and worked for the CIA. He entered the
NASA astronaut program in 1990, flew four missions on the space shuttle, and
helped build the International Space Station. He is a space consultant, author,
public speaker, and a senior research scientist at the Florida Institute for Human
and Machine Cognition.
Loading...
or support indie stores by buying on