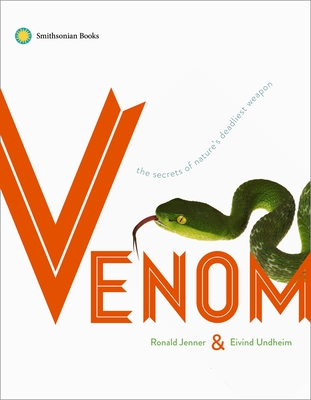 The Secrets of Nature's Deadliest Weapon

Venom brings readers face to face with some of the most dangerous creatures on the planet, including jellyfish, snakes, and wasps, as it uncovers the story of venom. The book explores how venom is used for predation, defense, competition, and communication by an incredible diversity of species. It examines the unique methods that these species have evolved to create and deliver their deadly toxins. The book traces venom back to its origin in early jellyfish and sea anemones, and reveals how venoms have evolved dozens of times independently all across the animal kingdom since that time. And finally, it examines the relationships between these dangerous creatures and humans. Humans have not only learned to live with them, but also to benefit from them: scientists increasingly are harnessing the power of venom to create new drugs, treatments, and anti-venoms.

Praise For Venom: The Secrets of Nature's Deadliest Weapon…

BOOKLIST
Venom! The very word inspires awe and terror. After all, who hasn’t seen a rattlesnake bite a mouse, at least on TV? But as research scientists Jenner and Undheim establish in this look at some of the most dangerous animals in the world, venom is one of evolution’s most elegant means of procuring food and defending oneself. First the authors define the difference between poisonous and venomous (poisons are transferred passively, venoms are delivered actively), then they move on to survey the different types of venom, the broad range of venomous animals, and the different ways venoms are delivered. Venoms are usually cocktails of different toxins, which can affect the victim in more than one way and can be subtle or brutal. The evolution of venom is a fascinating study, with venomous animals appearing in many taxa and striking similarities showing up in only distantly related species. The use of venoms in pharmaceuticals shows how the power of these toxins can be harnessed to fight disease and even to counter the damage caused by the venom itself.

PUBLISHERS WEEKLY
Venom researchers Jenner and Undheim record the stunning, often beautiful diversity of the world’s venomous species and the parallel evolution of poisons and venoms in this generously illustrated—and shudder-inducing—volume. The authors carefully convey substantial physiological, chemical, and ethological information about the functions of nature’s aggressive pharmacopeia, which has evolved numerous times for predation, defense, and other more surprising uses. Jenner and Undheim devote a chapter to venoms used for human medicine, but focus mostly on the natural roles venoms play in their particular environments. The authors make plain that the study of venomous creatures is worthwhile in its own right and that researchers can learn lessons relevant to human physiology by studying the function of venom at the systems and molecular levels. However, they never imply that the value of these astonishingly well-targeted chemical cocktails derives from their potential service to the human world. The text itself is well-balanced, even occasionally bland, and the authors largely refrain from introducing their own emotional reactions, except in defending animal experimentation. The book is well suited to inspire budding biologists, while discussions about lethal capacity and stories of researchers bitten intentionally or unintentionally will still satisfy the curious thrill seeker. Color photos. (Oct.)

CHOICE
From web-spinning spiders and stealthy scorpions to platypuses and slithering snakes, the possibility of encountering venomous animals terrifies many. Often blinded by a deep-seated terror reaching far back in our evolutionary past, relatively few people make an effort to understand the nature of animal venom or the complex roles that such toxins play in animal survival. Calling attention to the considerable diversity of venomous animals and the multitude of weapon systems used to distribute their “toxic cargo,” the authors describe fundamental aspects of the biology, chemistry, and evolutionary history of animal venom and poison. These are put into perspective of the natural history (i.e., use in communication, competition, predation, and defense) of a wide array of animals, ranging from invertebrates (e.g., insects, snails, and jellyfish) to vertebrates (e.g., amphibians, reptiles, and even mammals). The authors also consider venomous animals from a sociological point of view, emphasizing the significance of such creatures in culture, mythology, and medicine. This interesting, well-written, and nicely illustrated volume will introduce readers to a fascinating corner of natural history. It will be of interest to general readers and naturalists alike.

RONALD JENNER is a Research Leader in the Department of Life Sciences at the Natural History Museum, London. EIVIND UNDHEIM is an ARC DECRA Research Fellow at the University of Queensland, Australia, and the author of numerous publications on venom.
Loading...
or
Not Currently Available for Direct Purchase