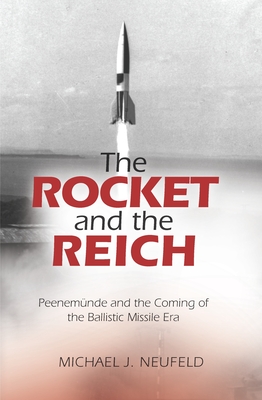 The Rocket and the Reich

Peenemunde and the Coming of the Ballistic Missile Era

Launched by the Third Reich in late 1944, the first ballistic missile, the V-2, fell on London, Paris, and Antwerp after covering nearly two hundred miles in five minutes. It was a stunning achievement, one that heralded a new age of ballistic missiles and space launch vehicles. Michael J. Neufeld gives the first comprehensive and accurate account of the story behind one of the greatest engineering feats of World War II. At a time when rockets were minor battlefield weapons, Germany ushered in a new form of warfare that would bequeath a long legacy of terror to the Cold War, as well as the means to go into space. Both the US and USSR's rocket programs had their origins in the Nazi state.

Praise For The Rocket and the Reich: Peenemunde and the Coming of the Ballistic Missile Era…

Publishers Weekly
Based on previously untapped sources, Neufeld's comprehensive history of German rocket research and development during WWII includes an analysis of Hitler's indirect involvement with the Peenemunde-based project and SS chief Heinrich Himmler's ultimate domination of it. The study reveals how the decision came about to use slave labor from the concentration camps to manufacture the terrifying "buzz bombs" that, according to Neufeld, had minimal effect on the course of the war. He presents solid evidence that the project's technical director-Wernher von Braun, who later headed NASA's rock booster program-was an SS officer, and describes his 1944 arrest accused of sabotaging the A-4 project by concentrating more on space flight than on his duties. Von Braun was freed after several days. The author discusses the postwar rebirth of the rocket program at the Redstone Arsenal in Huntsville, Ala., where von Braun and several of his Peenemunde colleagues played a historic role in the development of the intercontinental ballistic missile and the space-launch vehicle. Neufeld, curator of WWII history at the National Air and Space Museum, has written a major study of the Nazi rocket program. Illustrations.

Library Journal
Neufeld, the curator of World War II history at the National Air and Space Museum in Washington, D.C., provides a well-written, comprehensively researched analysis of Nazi Germany's missile program and its antecedents. The German army became interested in rocket technology during the 1930s at the urging of Karl Becker, an engineer who believed a radical new weapon could deliver a psychological blow to an enemy. The construction of Peenemunde in 1936-37 provided a focal point for research and development that made guided missiles a reality despite Germany's limited material and scientific resources. Neufeld shows that while the rocket program was not Nazi in origin, its leaders readily compromised themselves by accepting National Socialism, especially in agreeing to the widespread use of slave labor. A more ambiguous legacy of Peenemunde is its rocket technology, which decisively shaped the second half of the 20th century. For academic collections. -- D.E. Showalter, Colorado Coll., Colorado Springs

Booklist
As befits the work of a National Air and Space Museum curator, this book is literate, thorough, and balanced. The last quality is particularly important given the topic, which is the relationship of German rocket scientists to the government of the Third Reich. That relationship was a good deal more complex than both their enemies and their apologists have claimed. Many of the scientists were at the very least obtuse about the military aspects of the program and turned a blind eye to the extensive use of slave labor in the V-2 factories. Neufeld avoids either scapegoating or excusing and has amassed his research--much of it from primary sources now disappearing from the ranks of the living--into what promises to be a classic account of the devil's bargain that coincidentally accelerated the possibility of manned space flight by a full generation. -- Roland Green

Kirkus Reviews
A dry history of the Nazi rocket program, concentrating on the development of liquid fuels for missiles. Neufeld, curator of WW II history at the Smithsonian's National Air and Space Museum, traces the history of the V-2 ballistic missiles catapulted by the Nazis on London and Paris. He discusses the various men who participated in the secret research at the rocket center Peenemnde, most notably wunderkind German aristocrat Wernher von Braun. Of more modest social status, but equally important, was Walter Dornberger, who administered the program. Neufeld's revisionist thesis is that the scientists were not all fanatics devoted to Hitler's cause. Yet the fact is, though Peenemnde was originally supported by industrialists, it eventually became one of Hitler's favored projects, and its scientists stood tall for the Third Reich. Many of them worked surreptitiously for German rearmament even before the war. Neufeld often verges on being an apologist for these men who used their genius for the Nazi cause while slave labor put the finishing touches on the instruments of war. He drones on in the manner of an official military historian, also dealing with the rivalries of bureaucratic ``empires'' within the Reich--intelligence, propaganda, etc.--as they jockeyed for Hitler's favor. In a book about rocketry one naturally expects some scientific discussion, but Neufeld's text is far too technical for nonspecialists. He is quite right in pointing out the irony of the Nazi rocket program's contributions to the Cold War: Victorious Americans and Soviets took German scientists as war booty to feed their own military machines, and Von Braun became a major force in NASA. Neufeld deserves his due for thorough research of both German and American archives, but his analysis is questionable and the writing is not up to the potential of the narrative.

One cannot study science and technology in the Third Reich without raising dangerous, difficult and important general questions about the relationship between knowledge and power, the moral responsibility of scientists and engineers, and the relationship between modernity and brutality...[Neufeld] has written the first complete history in English of the story of the German liquid-fuelled rocket programme...and does not shy away from these issues. --David Edgerton, Nature

Absorbing...This is a hard-hitting book, but is also a fair and scholarly one that does equal justice to all aspects of the German rocket program--technical, political, moral, and human. It bids fair to become the standard work on this subject for many years to come. --Richard J. Evans, New York Times Book Review

The German V-2 rockets that hit London in 1944 arrived silently, having covered 200 miles in five minutes. The Rocket and the Reich...is the astonishing story of their development and how the Allies tried to kill the development teams and destroy the factories. It is a dispassionate account, but one that builds excitement and tension in the reader. --New Scientist

A truly remarkable, wonderful book. This history of German missile technology is a must...The author...has developed in a magnificent way the origins, motivations, technical development and advent of the German rockets...In a word, a very well written book. --The Space Book Board website

The definitive history of German efforts to research, develop, and build rockets during the Third Reich and World War II. Neufeld's account is both thorough and subtle, critical and fair, and avoids the twin pitfall of demonization and hagiography, which plague most other accounts of Wernher von Braun and the German rocket program. This book makes an important contribution to the history of technology, of World War II, and of National Socialism. --Mark Walker, Union College

Michael J. Neufeld is a space history curator at the National Air and Space Museum, Smithsonian Institution, and the author of Von Braun: Dreamer of Space, Engineer of War.
Loading...
or
Not Currently Available for Direct Purchase