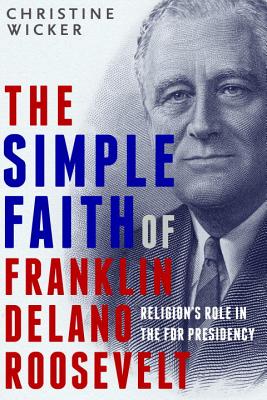 Religion's Role in the FDR Presidency

In The Simple Faith of Franklin Delano Roosevelt, religion journalist and author Christine Wicker establishes that faith was at the heart of everything Roosevelt wanted for the American people. This powerful book is the first in-depth look at how one of America's richest, most patrician presidents became a passionate and beloved champion of the downtrodden--and took the country with him. Those who knew Roosevelt best invariably credited his spiritual faith as the source of his passion for democracy, justice, and equality. Like many Americans of that time, his beliefs were simple. He believed the God who heard his prayers and answered them expected him to serve others. He anchored his faith in biblical stories and teachings. During times so hard that the country would have followed him anywhere, he summoned the better angels of the American character in ways that have never been surpassed.

Praise For The Simple Faith of Franklin Delano Roosevelt: Religion's Role in the FDR Presidency…

PUBLISHERS WEEKLY
Wicker, formerly a religion writer for the Dallas Morning News, tells a straightforward story of Pres. Franklin D. Roosevelt's deep religiosity and its influence on his presidency. Wicker traces Roosevelt's developing of a religious vision from his childhood, where he learned, after seeing his prayers about his father's health answered, that God actively communicated with people. Wicker then details Roosevelt's school days at Groton and the onset of polio. Particularly engaging is Wicker's analysis of Roosevelt's first inaugural address, illustrating the many instances in the speech where he weaves biblical language and religious precepts into his vision for a nation suffering through the Great Depression. In the address and throughout the remainder of his four terms in office, Roosevelt's social gospel--the revival of hope through brotherhood--culminates in his speech to the country in which he declares the enduring Christian idea that "we are all members of one another." Wicker's appealing little book is a fun glimpse into a previously little-explored corner of F.D.R.'s life.

DALLAS MORNING NEWS
Anyone acquainted with author and journalist Christine Wicker knows how much she relishes a challenging assignment. So it's not surprising that her most recent book, The Simple Faith of Franklin Delano Roosevelt, delves into one of the most-written-about figures in U.S. history. Yet Wicker not only has plucked out a thread previously unexplored, she makes a compelling case that faith was at the heart of all of Roosevelt's efforts to lift up the lives of his fellow Americans. As she puts it, "all the ways he failed to be a good Christian didn't keep him from being an effective Christian."

THE CHRISTIAN SCIENCE MONITOR
F.D.R.: Man of faith? Religion journalist Christine Wicker makes a convincing and inspiring case in her examination of his deeply held and deeply influential beliefs in The Simple Faith of Franklin Delano Roosevelt: Religion’s Role in the FDR Presidency. As she puts it, “all the ways he failed to be a good Christian didn’t keep him from being an effective Christian” – a lesson for all of us about how we can be far from perfect yet still change the world.

CHRISTINE WICKER is a former longtime religion reporter for the Dallas Morning News. She is a New York Times bestselling author of numerous books, most recently The Fall of the Evangelical Nation.
Loading...
or
Not Currently Available for Direct Purchase