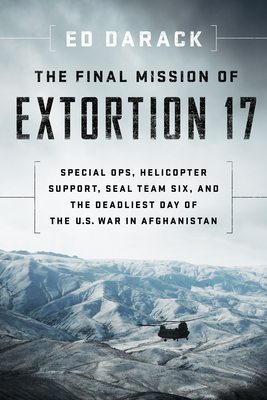 The Final Mission of Extortion 17

On August 6, 2011, a U.S. Army CH-47D Chinook helicopter approached a landing zone in Afghanistan 40 miles southwest of Kabul. The helicopter, call sign Extortion 17, was on a mission to reinforce American and coalition special operations troops. It would never return. Insurgents fired at the Chinook, severed one of its rear rotor blades, and brought it crashing to the ground. All 38 onboard perished instantly in the single greatest moment of sacrifice for Americans in the war in Afghanistan. Those killed were some of the U.S.'s most highly trained and battle-honed commandos, including 15 men from the Gold Squadron of the Naval Special Warfare Development Group, known popularly as SEAL Team 6, which had raided a Pakistan compound and killed Osama bin Laden just three months earlier. The downing of Extortion 17 spurred a number of conspiracy theories, such as the idea that the shootdown was revenge for bin Laden's death. In The Final Mission of Extortion 17, Ed Darack debunks this theory and others and uncovers the truth behind this mysterious tragedy. His account of the brave pilots, crew, and passengers of Extortion 17 and the events of that fateful day is interwoven into a rich, complex narrative that also discusses modern joint combat operations, the history of the Afghan war to that date, U.S. helicopter use in Afghanistan, and the new and evolving military technologies and tactics being developed to mitigate such tragedies now and in the future.

Praise For The Final Mission of Extortion 17: Special Ops, Helicopter Support, SEAL Team Six, and the Deadliest Day of the U.S. War in Afghanistan…

“Meticulously reported and deftly told, this is the definitive account of the 38 people killed aboard Extortion 17—the largest loss of life in a single incident during the Afghan war. Ed Darack not only debunks the conspiracy theories once and for all; he also honors the pilots, crew, and special operators who perished on that fateful day. This is an important book for anyone who wants to understand the war in Afghanistan and the Americans who have risked their lives fighting it.”
—R. M. Schneiderman, Deputy Editor, Newsweek

“Far more gripping than any thriller, this well-researched and cleanly written account of an American battlefield tragedy is one of the finest books to emerge from our recent wars. Crafted with knowledge of twenty-first-century combat and deep respect for our troops, this book is nonetheless unsparing in its portrait of war’s reality and the toll it takes on flesh-and-blood men in uniform.”
—Ralph Peters, Fox News strategic analyst and author of Lines of Fire

“Darack expertly re-creates the tragedy of Extortion 17. Skillfully reported, the book is a must-read for anyone looking to understand what happened the night Extortion 17 was shot down in Afghanistan.”
—Kevin Maurer, coauthor of No Easy Day

PUBLISHERS WEEKLY
Darack (Victory Point), a military writer and photographer who has embedded with units in Iraq and Afghanistan, shares a well-researched story of the downing of a U.S. Army CH-47D Chinook helicopter, call sign Extortion 17, carrying members of SEAL Team Six in Afghanistan on Aug. 6, 2011. Where previous works on this subject have largely highlighted the operators of SEAL Team Six, Darack focuses his take on the incident—it is the largest single American loss of life in the Afghanistan War, with all 38 on board killed—on the five crew members of the helicopter. As a result, this work is valuable and informative as it describes the critical role Army Aviation played in Iraq and Afghanistan and makes clear the difficulties of flying in the high altitudes of Afghanistan’s mountain ranges. Threats faced by Army Aviation in Iraq and Afghanistan include enemy action (44 helicopters have been shot down in Iraq and Afghanistan with the loss of more than 120 lives), mechanical failure, and shifting weather conditions. Short, clear, and tersely written, Darack’s book is suited to readers interested in military affairs and is a fitting tribute to the Army aviators represented by the crew of Extortion 17. Maps & illus.

BOOKLIST
Darack tells the life stories of the 39 men flying under the call sign, Extortion 17, who were killed on August 6, 2011, when their Chinook helicopter was shot down over Afghanistan. Military argot permeates Darack’s account, giving his readers a sense of the high degree of training necessary for personnel to conduct the kind of operation on which Extortion 17 was embarked. It was to be a night-time landing of a special operations force to capture or kill a Taliban leader. Explaining the intricate aerial ballet that supports such an action (which includes gunships, surveillance planes, and bomb-laden fighter jets), Darack underscores the high-tech American way of making war versus the low-tech yet effective efforts of the Taliban: it was a rocket-propelled grenade that downed Extortion 17. Dramatizing the incident, based on real-time recordings from the orbiting support planes, Darack delivers a respectful salute to the dead amid detailed exemplification of the bravery of those fighting America’s protracted war in Afghanistan.

LIBRARY JOURNAL
Writer and photographer Darack (Victory Point) investigates the destruction of a Chinook helicopter carrying a number of high-profile special operatives, including numerous men from SEAL Team 6, whom are best known for the mission that killed Osama Bin Laden. Darack recounts the circumstances surrounding this August 2011 event, attempting to debunk a theory that claims the aircraft was destroyed in an act of revenge for Bin Laden’s death. Most are aware of the effort to eliminate Bin Laden, but fewer may recall this tragedy with as much clarity, having received far less media exposure. The author provides a thorough treatment of the disaster, with several chapters dedicated to the personnel and the specifications of the aircraft, which may not be captivating to the layperson but would be of interest to military historians. Darack also does an admirable job of demonstrating through science, history, and statistics (owing to the inherent inaccuracy of a rocket-propelled grenade [RPG], it would be a poor choice for such an important “revenge” mission) that vengeance conspiracies could be safely ruled out.
Verdict: This is less of a narrative and more of a march through the events and circumstances, making it ideal for modern history buffs and military historians and perhaps less so for casual readers.—Benjamin Brudner, Curry Coll. Lib., Milton, MA

THE VIRGINIAN-PILOT
Using eyewitness accounts and unclassified information from the Defense Department, Darack dissects the fateful incident, with a wider view of what other elements were on scene, what they saw, and how they reacted. He details the persistent surveillance of the suspected attackers, and follows them to their demise – after they violated their own security procedures by bragging of their success and being careless in their movements and associations.

The maps and photos that Darack includes are especially useful in helping readers understand a tragic but entirely plausible scenario. His book is vital for fully appreciating the contribution of our expert high-altitude aviators, the risks they take, and the terrible consequences that can result from a confluence of factors.

ED DARACK is a writer and photographer who has traveled to Iraq and Afghanistan numerous times to embed with infantry and aviation units at the front lines of modern war. He is the author of four books, including Victory Point, and numerous articles on military topics ranging from counterinsurgency to close air support. His work has been published in Air & Space magazine, the Marine Corps Gazette, Leatherneck Magazine, Foreign Policy, Proceedings of the United States Naval Institute, and others.
Loading...
or support indie stores by buying on