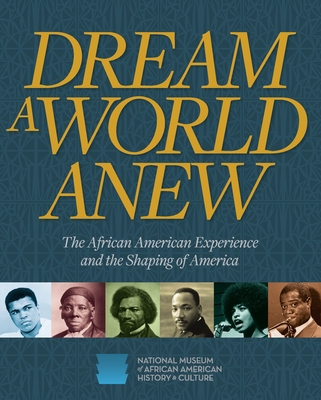 The African American Experience and the Shaping of America

Praise For Dream a World Anew: The African American Experience and the Shaping of America…

BOOKLIST
History will be made and embraced when the National Museum of African American History and Culture, a long-in-the-works and crucial addition to the Smithsonian Institution, opens on the National Mall in Washington, D.C., in September 2016. This richly researched, clarion, and visually exciting volume introduces the museum’s encompassing approach to the depth and complexity of the African American experience. With 275 color illustrations and essays brief and extended by two dozen scholars and curators, this welcoming overview covers a broad spectrum of subjects from slavery, emancipation, and desegregation to African Americans in the military, African American churches and educational institutions, the black press, “black meccas,” black entrepreneurs, and African American artists and athletes. As valuable as the cultural perspectives are, the numerous portraits of individuals stand out, such as enslaved Bridget “Biddy” Mason, who successfully sued for her freedom and became a millionaire, and once-enslaved Robert Smalls, who became a Civil War Hero and a five-term U.S. congressman. "Helping the public discover a meaningful past” in order “to understand the present” is the museum’s mission, and it is splendidly launched by this magnetic, many-faceted book.
-Donna Seaman

KIRKUS
A literary companion to the Smithsonian's soon-to-open National Museum of African American History and Culture. Jumping from history to culture in an earnest attempt to be inclusive, this lavishly illustrated work by the museum's staff and editor Conwill highlights the museum's collection, which has been steadily gathered since 2005 and will open to the public in September 2016 in its imposing new space on the Washington Mall. The contributors to this excellent resource are stellar—e.g., "sage adviser" John Hope Franklin (now deceased)—and they move beyond the stereotypes embedded in scholarship throughout the eras to bring a fresh sense of how African-Americans contribu ted mightily to the overall "great American dream" and changed it for the better. The enslavement of Africans and their importation to the New World in the 17th century mark the beginning of this tortuous journey, and the editors take readers up to the Civil War in handsome layouts featuring photographs of the collection, such as items owned by slaves and short bios of notable figures like abolitionist publisher William Lloyd Garrison and crusader Sojourner Truth. Eloquent poems help break up the brisk historical tone, and the superb scholarship continues in chapters dealing with Reconstruction and black migration, as well as "Making a Way Out of No Way," which concerns the building of institutions that allowed African-Americans to get educated (e.g., Howard University, Tuskegee Institute) and succeed in life (churches, businesses, newspapers). Interim chapters on military participation and sporting heroes (male and female) make an awkward juxtaposition against the chronolog y, while the last chapter on "African American Influence on American Culture" is dazzling. Some of the contributors include Yale historian David Blight, museum supervisory curator Elaine Nichols, renowned scholar Peniel Joseph, and author Tonya Bolden, among others. An enticing guide to the museum's extensive exhibits.

LIBRARY JOURNAL
To celebrate and commemorate the September 2016 opening of the most recent Smithsonian Institution museum, the National Museum of African American History and Culture (NMAAHC) in Washington, DC, commissioned this collection of 27 essays. Adopting as a title the opening lines of a Langston Hughes poem, editor Kinshasha Holman Conwill (deputy director, NMAAHC) divides the work into chapters that span slavery to emancipation, Jim Crow and the civil rights movement, and African American influence and presence in American culture. Together, the 24 contributors provide expert chronological and thematic explorations of both the centrality of the African American experience to U.S. evolution as well as its diversity. Recurrent ideas grapple with African American travails and triumphs and advance what NMAAHC founding director Lonnie G. Bunch III in his introduction describes as the museum’s mission—to introduce new audiences to the African American past while also prodding public memory to confront America’s racial history, its pains, and its prospects. VERDICT With the feel of an exhibition catalog rich with illustrations, this handsome work provides both a sweeping historical overview of African American history and a tantalizing glimpse of the artifacts, images, and stories NMAAHC promises to display from among its treasures.—Thomas J. Davis, Arizona State Univ., Tempe

WASHINGTON INFORMER
I loved this book, and I think you will, too. If you enjoy history or if you’re planning a visit to our Nation’s capital, Dream a World Anew is a souvenir you’ll want to keep.

The National Museum of African American History and Culture was established in 2003 as the 19th museum of the Smithsonian Institution, the largest museum complex and research organization in the world. Its mission is to provide for the collection, study, and establishment of programs and exhibitions relating to African American life, art, history, and culture.
Loading...
or support indie stores by buying on