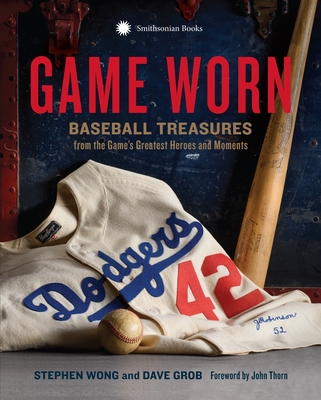 Baseball Treasures from the Game's Greatest Heroes and Moments

Game Worn: Baseball Treasures from the Game's Greatest Heroes and Moments is a richly illustrated exploration and first-of-its-kind compendium study of the world's most coveted and precious baseball uniforms worn by Major League ballplayers during the twentieth century. This coffee-table book features many of the most historically significant uniforms, jackets, hats, as well as other treasured baseball collectibles that tell us as much about the history and soul of America as they do about the game and the players.

Some of the extraordinary highlights featured in this book include: Babe Ruth's road jersey from his first season with the New York Yankees (1920), the sole surviving uniform from the infamous 1919 World Series, Joe DiMaggio's rookie uniform from 1936, the Boston Red Sox road uniform Ted Williams wore during his epic 1941 season, Jackie Robinson's Brooklyn Dodgers home jersey from the 1952 season, Bill Mazeroski's Pittsburgh Pirates home uniform worn to hit the game-winning home run in game 7 of the 1960 World Series, and a visual feast of rare uniform styles.

Each of the 71 entries includes sumptuous photography of the uniform and associated memorabilia, as well as a poignant and lively narrative highlighting its significance. The book also features a first-of-its-kind illustrated compendium with elaborate definitions of relevant terms that every baseball fan and collector needs to know, ranging from the All Star Game Uniform to the Zig-Zag Stitch. This book is an absolute must-have for anyone who has ever loved the game of baseball.

STEPHEN WONG, a lifelong collector of rare and historically significant baseball artifacts, authored the top-selling Smithsonian Baseball: Inside the World's Finest Private Collections, which was nominated for the Casey Award. Wong has advised a number of the world's top collectors and has lent his expertise to numerous baseball exhibitions, including those at the Chicago Historical Society, the Museum of the City of New York, the Yogi Berra Museum & Learning Center, and the National Museum of American Jewish History. DAVE GROB is the nation's foremost authenticator of vintage major league baseball uniforms. FRANCESCO SAPIENZA is a New York-based people and food photographer who worked on How To Eataly: A Guide to Buying, Cooking, and Eating Italian Food.

Praise For Game Worn: Baseball Treasures from the Game's Greatest Heroes and Moments…

FINALIST FOR THE 2016 CASEY AWARD

Baseball fans love memorabilia, and high on the wish lists of the most avid collectors are uniforms—not mere replicas but actual game-worn jerseys. Sadly, such rarities are well beyond the budgets of most fans, which makes this exquisite coffee-table book all the more entrancing. Yes, there are beautifully composed, striking photos of jerseys, pants, hats, and gloves across the history of the game, from the dead-ball era to the end of the twentieth century; but there are also other illustrations capturing the remarkable scope of baseball memorabilia (scorecards, programs, ticket stubs, magazine ads, including one from Chesterfield showing Joe DiMaggio and Stan Musial with cigarettes dangling from smiling mouths). And don’t forget the text: coauthors Wong and Grob contribute stylish and perceptive profiles of the various superstars whose jerseys decorate the text as well as fascinating facts about uniform fabrics and design over the years (Who knew that satin uniforms were once the rage?). Hats off, too, to perhaps the most entertaining collection of pull quotes ever to appear in a baseball book (Tallulah Bankhead on Willie Mays: “There have been only two geniuses in the world: Willie Mays and Willie Shakespeare.”). A must for every baseball collection. — Bill Ott

Baseball is a game of endurance, statistics, and more interestingly, a sport with iconic uniforms. As longtime Detroit Tigers outfielder Ty Cobb once said, “[baseball] is a struggle for supremacy, a survival of the fittest.” Wong (Smithsonian Baseball) along with debut author Grob has created a fascinating book about historically significant baseball attire. What makes these garments so special is their importance to the game in which they were originally worn. The authors gives a fantastic description of each uniform and thrillingly guide readers through the moment in history. There are uniforms from Ty Cobb, Babe Ruth, Christy Mathewson, Jackie Robinson, and numerous others. This captivating look at the subject is unlike anything readers will find aside from visiting the National Baseball Hall of Fame and Museum in Cooperstown. The 71 featured uniforms, along with photographs that speak a thousand words, each tell an exceptional story. VERDICT This rare look at the importance of baseball garments is a visually striking compilation that reads like a Ken Burns documentary. A book for all baseball lovers.—Gus Palas, Ela Area P.L., Lake Zurich, IL
or
Buy Here
(This book is on backorder)
Copyright © 2020 American Booksellers Association