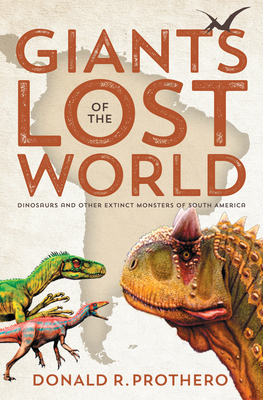 Giants of the Lost World

Dinosaurs and Other Extinct Monsters of South America

More than a hundred years ago, Sir Arthur Conan Doyle wrote a novel called The Lost World with the exciting premise that dinosaurs and other prehistoric beasts still ruled in South America. Little did Conan Doyle know, there were terrifying monsters in South America--they just happened to be extinct. In fact, South America has an incredible history as a land where many strange creatures evolved and died out. In his book Giants of the Lost World: Dinosaurs and Other Extinct Monsters of South America, Donald R. Prothero uncovers the real science and history behind this fascinating story. The largest animal ever discovered was the huge sauropod dinosaur Argentinosaurus, which was about 130 feet long and weighed up to 100 tons. The carnivorous predator Giganotosaurus weighed in at more than 8 tons and measured more than 47 feet long, dwarfing the T. rex in comparison. Gigantic anacondas broke reptile records; possums evolved into huge saber-toothed predators; and ground sloths grew larger than elephants in this strange, unknown land. Prothero presents the scientific details about each of these prehistoric beasts, provides a picture of the ancient landscapes they once roamed, and includes the stories of the individuals who first discovered their fossils for a captivating account of a lost world that is stranger than fiction.

Praise For Giants of the Lost World: Dinosaurs and Other Extinct Monsters of South America…

KIRKUS REVIEWS
A remote island inhabited by creatures unknown to science is a hoary sci-fi scenario that bears some relation to reality, according to this enthusiastic, somewhat scattershot history of life on a vast, isolated island-continent: South America. A veteran science writer and professor of geology, physics, planetary sciences, and vertebrate paleontology, Prothero (The Story of Life in 25 Fossils: Tales of Intrepid Fossil Hunters and the Wonders of Evolution, 2015, etc.) reminds readers that 250 million years ago, Earth’s land occupied a single supercontinent, Pangea, and all life evolved in unison. Around 150 million years ago, Pangea broke up, South America drifted away, and things got interesting. The familiar giants of the golden age of dinosaurs trod North America and Asia only because that’s where early paleontologists looked. When Latin Americans joined the hunt, they turned up new and oddball species including a carnivorous dinosaur larger than Tyrannosaurus and a titanic vegetarian larger than Brontosaurus. Odder still, when dinosaurs disappeared 65 million years ago and mammals replaced them, the top predators were not bears, lions, and wolves that evolved up north, but rather huge, carnivorous, flightless birds. Also present was a flying bird five times larger than today’s largest flying bird, the Andean condor, and a ground sloth as big as an elephant. Then, 10 million years ago, Central America rose from the waters, and northerners, apparently more competitive, moved in and took over. Even animals associated with South America (llamas, jaguars, and tapirs, among others) originally lived much further north. Prothero spends more time on size and weirdness than serious readers require, but he also delivers amusing anecdotes, a lucid history of evolutionary ideas, stories of the great fossil discoveries, and an entertaining description of animal evolution on an isolated continent.

QUARTERLY REVIEW OF BIOLOGY
A highly valuable resource for anyone with a serious interest in dinosaurs and other ancient creatures of South America and a great and enjoyable read. Even as dinosaur family trees change, the closer and closer relationship to birds emerge, and all of the new discoveries alter what we thought we knew, the book is fertile ground for students and experts interested in paleontology.

DONALD R. PROTHERO specializes in physics, planetary sciences, astronomy, earth sciences, and vertebrate paleontology. He taught for 35 years at the college level at Columbia, Knox, Pierce, and Vassar Colleges, most recently as professor of geology at Occidental College, and lecturer in geobiology at the California Institute of Technology. He has authored or edited more than 30 books and 300 scientific papers.
or
Not Currently Available for Direct Purchase