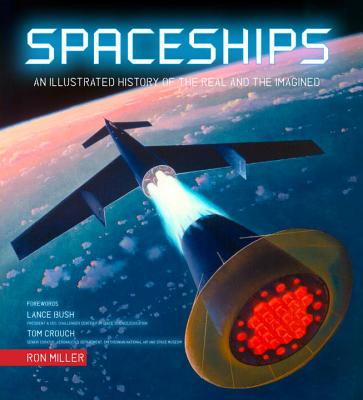 An Illustrated History of the Real and the Imagined

How have actual spaceships influenced the design of fictional ones like the Millenium Falcon and the Starship Enterprise? Did a fiction series in Collier's magazine really inspire us to create real-life space stations like Mir and the ISS? How have our depictions of space travel developed as the reality of space travel changed? In his new book Spaceships: An Illustrated History of the Real and the Imagined, Ron Miller shows that when it comes to manned spacecraft, art actually does imitate life and, even more bizarrely, life imitates art. In fact, astronautics owes its origins to art. Long before engineers and scientists took the possibility of spaceflight seriously, virtually all of its aspects had been explored in art and literature. Miller takes readers on a visual journey through the history of the spaceship both in our collective imagination and in reality. The vivid illustrations trace the spaceship through its conception, engineering, and building, from the practical origins of spaceflight in the wartime V-2 rocket to future Mars programs. They also chart, in exquisite detail, the ubiquity of spaceships in the golden age of space travel (1950s and '60s) plus their broad influence in popular art, television, film, and literature. Spaceships reminds us of the romance of manned space travel as it has been, as we imagined it could be, and as it may be in the future.

Praise For Spaceships: An Illustrated History of the Real and the Imagined…

BOOKLIST
Space really is our final frontier, and mankind has been figuring out how to get there for a long, long time. With this new book, Smithsonian has published a heavily illustrated (the only pages without illustrations are the index!) compendium of all things related to human space flight. Combining actual history with speculation and viewing it from a very international perspective, Miller's book does an excellent job of presenting the topic from our collective imagination (Star Trek, Star Wars, and Buck Rogers) as well as from reality (Apollo, Mir Space Station, and the space shuttle). It will be enjoyed equally by history buffs, science-fiction fans, and scientists.

CHOICE
Miller's new work is a beautiful picture book of real spacecraft, spacecraft currently under development, and other spacecraft that have been imagined or presented in literature, film, and other forms of art. The book follows a chronological order with development—beginning with the “dreamers,” dating back to Copernicus and Galileo, and continuing all the way through future missions that have yet to take flight. Along with real spacecraft, Miller mixes in imaginary visions conceived by the likes of Jules Verne, Walt Disney, and Gene Roddenberry. The book includes many obscure drawings, photographs, and sketches from a wide variety of individuals; these show how the visionaries that created these images helped influence the scientists and engineers who play significant roles in developing actual spacecraft. Overall, this book is appropriate for a general audience, especially those individuals interested in spaceships. This book has the potential to influence the next generation of rocket scientists.

RON MILLER is an artist and author who specializes in writing and illustrating books on astronomy, astronautics, and science fiction. He has served on the faculty at the International Space University, as contributing editor for Air & Space/Smithsonian magazine, and as art director for the Smithsonian National Air and Space Museum's Albert Einstein Planetarium.
Loading...
or
Not Currently Available for Direct Purchase