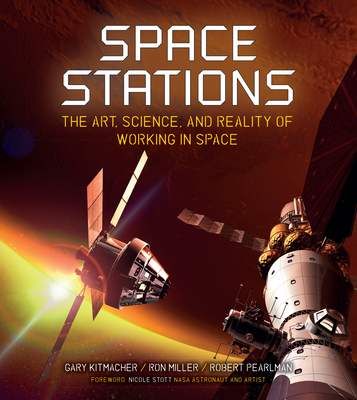 The Art, Science, and Reality of Working in Space

Space stations represent both the summit of space technology and, possibly, the future of humanity beyond Earth. Space Stations: The Art, Science, and Reality of Working in Space takes the reader deep into the heart of past, present, and future space stations, both real ones and those dreamed up in popular culture. This lavishly illustrated book explains the development of space stations from the earliest fictional visions through historical and current programs--including Skylab, Mir, and the International Space Station--and on to the dawning possibilities of large-scale space colonization. Engrossing narrative and striking images explore not only the spacecraft themselves but also how humans experience life aboard them, addressing everything from the development of efficient meal preparation methods to experiments in space-based botany. The book examines cutting-edge developments in government and commercial space stations, including NASA's Deep Space Habitats, the Russian Orbital Technologies Commercial Space Station, and China's Tiangong program. Throughout, Space Stations also charts the fascinating depiction of space stations in popular culture, whether in the form of children's toys, comic-book spacecraft, settings in science-fiction novels, or the backdrop to TV series and Hollywood movies. Space Stations is a beautiful and captivating history of the idea and the reality of the space station from the nineteenth century to the present day.

Praise For Space Stations: The Art, Science, and Reality of Working in Space…

PUBLISHERS WEEKLY
NASA project manager Kitmacher, science writer Miller (Aliens: Past, Present, Future), and space historian Pearlman deliver a generously illustrated crash course in the history, present, and future of space stations. After describing early cosmology, the authors move through the first theoretical and fictional descriptions of permanent space-based structures, the early days of space travel, the first working stations, and a longer look at the International Space Station. A section on space stations’ depiction in pop culture, from German author Karl Laffert’s 1926 novel about a “Weltraumstation” to Star Trek: Deep Space Nine, provides an intriguing perspective, and the authors finish with the possible implications for humanity, such as outposts like the ISS becoming “the means by which we leave our planet behind and find new places to live.” The layout is visually appealing, with plentiful drawings, diagrams, and photos to aid understanding. The physics and early historical background are at times rushed and repetitive, but the technical descriptions are unimpeachable and wonderfully complemented by accounts of the minutiae of everyday life in space. The authors have created an information-packed starting point perfect for anyone interested in space stations, but unsure where to begin. 400 color illus.

BOOKLIST
Although NASA scientists are still a long way from constructing a version of the iconic wheel-shaped space station in 2001: A Space Odyssey, since 1971, several well-designed research stations have successfully made it into orbit, from the ill-fated Skylab, which famously fell to earth after only six years, to the still operational International Space Station (ISS), launched in 1998. Weaving together history, popular culture, and aeronautical engineering details, Johnson Space Center consultant Kitmacher joins space memorabilia expert Pearlman and science fiction illustrator Miller in presenting a beautifully illustrated guide to these spectacular orbiting edifices from the past, present, and future. In seven richly informative sections, the authors look at the visionary prehistory of space stations, such as nineteenth century author Edward Everett Hale’s bizarre “brick moon,” survey the challenges behind building the Soviet Mir and ISS stations, and flash forward to images of futuristic space colonies. Covering technical breakthroughs as well as Star Trek and comic book references, their work will win high marks from space buffs and sf fans alike.

GARY KITMACHER is the mission manager for education and outreach at the Johnson Space Center. He has played a direct and vital role in NASA's ISS program. RON MILLER is an artist and author who specializes in writing and illustrating books on astronomy, astronautics, and science fiction. He recently published Spaceships: An Illustrated History of the Real and the Imagined. He has served on the faculty of the International Space University, as contributing editor for Air & Space/Smithsonian magazines, and as art director for the Smithsonian National Air and Space Museum's Albert Einstein Planetarium. ROBERT PEARLMAN is an American space historian and the founder and editor of collectSPACE, a website devoted to news and information concerning space exploration and space-related artifacts and memorabilia, especially in popular culture.
Loading...
or
Not Currently Available for Direct Purchase