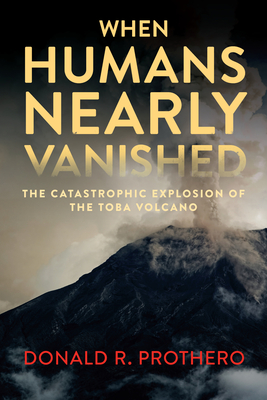 The Catastrophic Explosion of the Toba Volcano

Some 73,000 years ago, the huge dome of Mount Toba, in today's Sumatra, Indonesia, began to rumble. A deep vibration shook the entire island. Jets of steam and ash emanated from the summit, followed by an explosion louder than any sound heard by Homo sapiens since our species evolved on Earth. The eruption of the Toba supervolcano released the energy of a million tons of explosives; seven hundred cubic miles of magma spewed outward in an explosion forty times larger than the largest hydrogen bomb and more than a thousand times as powerful as the Krakatau eruption in 1883. So much ash and debris was injected into the stratosphere that it partially blocked the sun's radiation and caused global temperatures to drop by five to nine degrees. It took a full decade for Earth to recover to its pre-eruption temperatures.

When Humans Nearly Vanished presents the controversial argument that the Toba catastrophe nearly wiped out the human race, leaving only about a thousand to ten thousand breeding pairs of humans worldwide. Human genes today show evidence of a "genetic bottleneck," an effect seen when a population of organisms becomes so small that their genetic diversity is greatly reduced. This group of survivors could be the ancestors of all humans alive today. Donald R. Prothero explores the geological and biological evidence supporting the Toba bottleneck theory; reveals how the explosion itself was discovered; and offers insight into how the world changed afterward and what might happen if such an eruption occurred today. Prothero's riveting account of this calamitous supervolcanic explosion is not to be missed.

Praise For When Humans Nearly Vanished: The Catastrophic Explosion of the Toba Volcano…

“Prothero (The Story of Earth in 25 Rocks), a paleontologist and geologist, describes Toba’s eruption on the island of Sumatra in Indonesia, around 74,000 years ago, as the “largest volcanic eruption in the past 28 million years,” and briefly touches on the theory of how it decimated humanity, leading to a population bottleneck that partly explains the relative lack of genetic diversity in humans today. He also touches on the process by which scientists discovered the eruption had ever occurred, which only became apparent with new findings in 1993. Prothero writes [...] a precis of the current state of knowledge in these diverse fields.” —Publishers Weekly

“Prothero’s enthusiasm is infectious, and his boundless curiosity will draw in readers who may have only the lightest of knowledge about volcanoes, especially one as obscure as Toba. Prothero is a valuable guide.” —Booklist

“Donald Prothero takes us on a journey through the complex evolution of scientific fields—including volcanology, biology, and archaeology—that converged to form the controversial idea that an enormous eruption of the Toba volcano, in today’s Indonesia, may have caused a population bottleneck. This is a tale of discovery, exploring how large explosive eruptions capture our imagination and why the answers to scientific inquiries often begin with ‘It’s complicated.’” —Janine Krippner, volcanologist, Concord University

“A passionate examination of a controversial subject. Prothero traces how one of the largest eruptions in the history of our species may have irrevocably changed the evolution of Homo sapiens, delving into both volcanology and anthropology and how they are intertwined.” —Erik Klemetti, Associate Professor and Chair, Geosciences, Denison University, and author of Discover’s “Rocky Planet” blog

“Prothero takes the reader on a breathtaking tour of volcanoes and human evolution. By deftly weaving together tales of discovery in many realms, from supervolcanoes to DNA, Prothero shows how a supervolcano nearly brought an end to the human race 74,000 years ago.” —David M. Pyle, Professor, Earth Sciences, University of Oxford, and author of Volcanoes: Encounters through the Ages

“Prothero has done a very fine job of assembling information from many disciplines, including geology, genetics, and anthropology, and weaving it into a coherent and eminently readable account of the possible impacts of the gargantuan eruption of the Toba volcano in Sumatra some 74,000 years ago. There is something for everyone in this eclectic and lively piece of popular scientific writing.” —Martin Williams, Adjunct Professor in Earth Sciences and Emeritus Professor, University of Adelaide

DONALD R. PROTHERO specializes in physics, planetary sciences, astronomy, earth sciences, and vertebrate paleontology. He taught for 35 years at the college level at Columbia, Knox, Pierce, and Vassar colleges, most recently as professor of geology at Occidental College and as lecturer in geobiology at the California Institute of Technology. He has authored or edited more than 300 scientific papers and 30 books, including Giants of the Lost World: Dinosaurs and Other Extinct Monsters of South America.
Loading...
or support indie stores by buying on