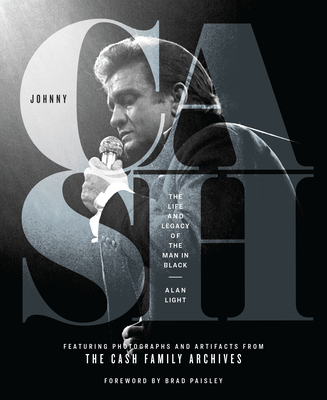 The Life and Legacy of the Man in Black

Johnny Cash: The Life and Legacy of the Man in Black is a Cash biography like no other. It reveals Cash's personal and professional life through largely unpublished material from the Cash family, including his handwritten notes and set lists; personal photographs of Cash with his family, traveling, and performing onstage; and beloved objects from his home and private recording studio. Alan Light, one of America's leading music journalists, traces Cash's story from his origins in rural Arkansas to his early recordings with Sun Records; from his battles with drug dependency and divorce to his romance with June Carter; and from his commercial musical successes, including At Folsom Prison and American Recordings, to his death and legacy. The book also includes vignettes on four sustaining themes of Cash's life: his musical influences, his social justice advocacy, his relationship with June, and his religious beliefs. Rich and revealing, Johnny Cash: The Life and Legacy of the Man in Black is ideal for all those who want to learn more about the personal side of the beloved performer.

Praise For Johnny Cash: The Life and Legacy of the Man in Black…

“Johnny gets the spotlight in Alan Light’s The Life and Legacy of The Man in Black.” —Billboard

“If you have time to read only one book on Johnny Cash this year, Light’s Johnny Cash: The Life and Legacy of the Man in Black should be the one you pick up. The stories are familiar, and many are told in other biographies, but these photos of Cash, his family, and his artifacts bring him and his music to life in a way that no other biography so far has been able to do.” —No Depression

“This book is an admirable work of loving and careful research and Light handles facts efficiently. He is a remarkable scholar whose understanding of American music history runs deep. Johnny Cash continues to have a strong influence on music today, despite his passing 15 years ago. His story continues because his music still lives among the people.” —All About Jazz

“Almost biblical with his deep baritone and stoic demeanor and all dressed in black, Cash was an authoritative figure, honest, serious, moralistic, and outspoken. Signed by Sam Phillips and Sun Records, the label on which Elvis Presley was getting attention by mixing black and white musical styles, Cash soon found listeners with his signature “boom-chicka-boom” sound, recording such hits as “Hey Porter,” “Cry! Cry! Cry!,” “Folsom Prison Blues,” and “I Walk the Line.” As a singer and guitarist, he introduced a darker, rawer, bleaker sound to rock ’n’ roll as well as a humanist element, speaking for the disenfranchised, in song and in life as he championed convicts, Native Americans, and the underprivileged. Music journalist Light deftly ties together all the different strands of Cash’s life, his recording career, groundbreaking television show, battles with substance abuse, marriage to June Carter Cash, and late-life revival with the American Recordings sessions. Aided by interviews with Cash and others and an abundance of photographs and artifacts, this biography will be a good companion to Robert Hilburn’s Johnny Cash (2013).” —Booklist

“A profusely illustrated volume documents a celebrated performer's struggles and hard-won triumphs. Veteran music journalist Light (What Happened Miss Simone?: A Biography, 2016, etc.) offers an admiring yet cleareyed biography of Johnny Cash (1932-2003), a composer, singer, and guitar player who crossed many genres. The author draws on Cash's autobiographies, music history and criticism, interviews, and writings by Cash's family to produce an intimate and engaging portrait. By far the greatest strength of the book, though, are the illustrations: memorabilia from family archives and abundant photographs that capture Cash's undeniable charisma. A treat for the Man in Black's many fans.” —Kirkus Reviews

“Working with the Cash family, Light (The Holy or the Broken) has gathered hundreds of never-before-seen photographs, lyric sheets, posters, and other artifacts from the Johnny Cash archives to produce this stunning and lavishly illustrated biography of the Man in Black. Light’s rich collection of photos and narrative bring Cash to life.” —Publishers Weekly

“There can never be another Johnny Cash. With close-up images and the big-picture story, this book offers new insight into the life of an American hero.” —Sheryl Crow

“This resonant book offers far more than an overview of Johnny Cash’s life and legacy: it gets to the very essence of who he was and what his life and music mean. Light’s text reads beautifully and stands as an ideal complement to photos that inspire reveries about the works and days of this extraordinary artist.” —Anthony DeCurtis, author of Lou Reed: A Life

“‘Johnny Cash was like Abraham Lincoln to me,’ John Prine once said. We all agreed, though if Prine had said the same of Elvis or Sinatra, we wouldn’t have, because it wouldn’t have made a damn bit of sense. But with Cash it did. He was a man, an idea, a morality, a way of looking at the world. Though wrapped in contradictions, Cash always stood tall, like he’d come out of the soil, one of nature’s inevitabilities. This book gives us an intimacy with the man. And that’s an accomplishment worth celebrating.” —Warren Zanes, author of Petty: The Biography

ALAN LIGHT has been one of America's leading music journalists for the past twenty years. He was a writer at Rolling Stone, founding music editor and editor-in-chief of Vibe, and editor-in-chief of Spin magazine. He has been a contributor to the New Yorker, GQ, Entertainment Weekly, Elle, and Mother Jones. He is the author of The Skills to Pay the Bills, an oral history of the Beastie Boys, and The Holy or the Broken: Leonard Cohen, Jeff Buckley, and the Unlikely Ascent of "Hallelujah"; and cowriter of the New York Times-bestselling memoir by Gregg Allman, My Cross to Bear.
Loading...
or
Not Currently Available for Direct Purchase