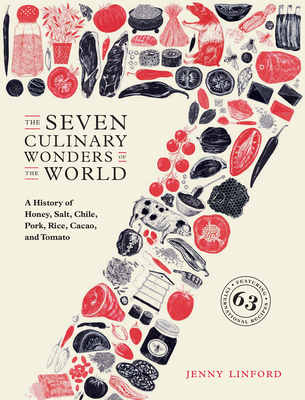 The Seven Culinary Wonders of the World

A culinary history of the seven food staples that have shaped human history, including 63 original recipes

The Seven Culinary Wonders of the World is a global culinary history told through the stories of seven essential ingredients found in cuisines all over the world: honey, salt, chile, pork, rice, cacao, and tomato. Each of these foundational ingredients has played a long and valuable role in human foodways and culture, and each has its own fascinating history.

This engagingly illustrated book traces the journeys of these foodstuffs as they were transported from their regions of origin to faraway cultures and countries, there to take up starring roles in new cuisines. The Seven Culinary Wonders of the World explores each food in depth, beautifully illustrated by specially commissioned artworks, and views them through a number of prisms--social, cultural, historical, and botanical--to offer readers fresh, informative insights into seemingly everyday foods that reveal themselves as wondrous. The rich and diverse cultural stories of these seven ingredients are also told, from the magical and aphrodisiac powers associated with cacao in Mesoamerican culture to the introduction of tomatoes to Europe by the Spanish conquistadors in the sixteenth century and the earliest cultivation of rice in China's Pearl Valley. Readers can take the seven ingredients into their own kitchens via 63 original recipes for dishes both traditional and innovative.

Praise For The Seven Culinary Wonders of the World: A History of Honey, Salt, Chile, Pork, Rice, Cacao, and Tomato…

"Linford (editor, 1001 Restaurants You Must Experience Before You Die) focuses on seven ubiquitous ingredients often taken for granted: honey, salt, chile, pork, rice, cacao, and tomato. Her book tells their fascinating histories and helps foster a new appreciation for them, relating some of their first recorded uses and how the ingredients spread worldwide through exploration and trade routes. The author shows how human ingenuity transformed them from expensive, exotic luxuries into affordable staples. The inclusion of folklore, facts of cultural and religious significance, and novel illustrations make the book both informative and pleasurable. Though over 60 easy recipes from a range of countries are included, the book’s real value is the entertaining history lesson. Linford’s idea is original and well-executed, making this a perfect read for a curious food lover who wants to know just a bit more but who would be overwhelmed by tomes devoted to a single ingredient." —Library Journal

JENNY LINFORD is a freelance food writer whose published work ranges from recipes to food and travel articles appearing in numerous venues, including the Financial Times, Time Out London Eating and Drinking Guide, Square Meal, and the British Library's Food Stories website. She is the author of The Tomato Basket Cookbook, Food Lovers' London, and The Chef's Library, among other books, and she was the general editor of 1001 Restaurants You Must Experience before You Die. ALICE PATTULLO is an illustrator whose work has been commissioned by a variety of clients, including Bon Appétit, Esquire, Country Living, and the Village Voice.
Loading...
or
Not Currently Available for Direct Purchase