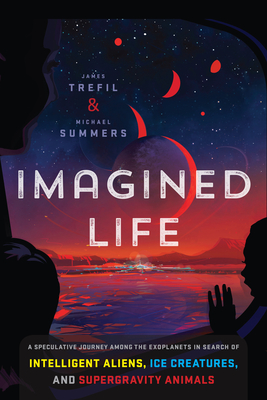 A Speculative Scientific Journey among the Exoplanets in Search of Intelligent Aliens, Ice Creatures, and Supergravity Animals

The captivating possibilities of extraterrestrial life on exoplanets, based on current scientific knowledge of existing worlds and forms of life

It is now known that we live in a galaxy with more planets than stars. The Milky Way alone encompasses 30 trillion potential home planets. Scientists Trefil and Summers bring readers on a marvelous experimental voyage through the possibilities of life--unlike anything we have experienced so far--that could exist on planets outside our own solar system.

Life could be out there in many forms: on frozen worlds, living in liquid oceans beneath ice and communicating (and even battling) with bubbles; on super-dense planets, where they would have evolved body types capable of dealing with extreme gravity; on tidally locked planets with one side turned eternally toward a star; and even on "rogue worlds," which have no star at all. Yet this is no fictional flight of fancy: the authors take what we know about exoplanets and life on our own world and use that data to hypothesize about how, where, and which sorts of life might develop. Imagined Life is a must-have for anyone wanting to learn how the realities of our universe may turn out to be far stranger than fiction.

Praise For Imagined Life: A Speculative Scientific Journey among the Exoplanets in Search of Intelligent Aliens, Ice Creatures, and Supergravity Animals…

PUBLISHERS WEEKLY
Starred Review. "Posing a far-reaching question—what will alien life look like when humankind finds it?—the coauthors of Exoplanets explore possible answers in this lively, imaginative, and accessible look at cutting-edge exobiology. This is a marvelous introduction to a field fueled by both imagination and science."

BOOKLIST
"As galactic tour guides, the authors demonstrate an infectious, playful curiosity alongside their technical prowess, maintaining a light touch with some heavy science. Will appeal to sf newcomers and budding space nerds."

LIBRARY JOURNAL
"This relatively easy read is an appealing addition to the growing body of recent works addressing the possibility of extraterrestrial life. VERDICT Both popular science and sf readers will enjoy this extrapolative natural history."

KIRKUS REVIEWS
"The prose is straightforward, and the authors make the potentialities of exoplanet life intriguingly real. [...] A curiosity-whetting investigation of imagined life beyond our world."

SCIENCE NEWS
"In Imagined Life, physicist James Trefil and planetary scientist Michael Summers set out on a safari through the cosmos, conjuring up the menagerie that might inhabit some of the thousands of exoplanets discovered thus far. Many of the book’s chapters explore potential life on various types of worlds, each vastly unlike Earth. Though fanciful and fun, the pair’s efforts are grounded in science. [...] Imagined Life is an amazingly fun read. While musing about how life — and even technological civilizations — might evolve and thrive on other worlds, Trefil and Summers slip in tons of info about how life on Earth came to be."

THE SPACE REVIEW
“Imagined Life, a speculative romp by two scientists that examines what life might be like on worlds very different from Earth. Trefil and Summers, a physicist and planetary scientist, respectively, at George Mason University, spend the first few chapters providing an overview of the science of life beyond Earth, from astronomy to biology. The fun really begins, though, when they examine a range of hypothetical worlds and their ability to support life.”

THE PLANETARY SOCIETY
Emily Lakdawalla
“At the outset, Trefil and Summers’ book is an excellent introduction to the basic ideas of the study of astrobiology, explaining what experiments have shown us so far, what scientists are searching for, and the underlying physics and chemistry. The language is very accessible, always emphasizing the questions scientists are asking, how we’ve discovered answers, and how much we still don’t know.”

SCIFI MIND
"It’s an interesting speculative roam that stays within the realm of what’s known about the formation of life and enlarges carefully beyond the bounds of current knowledge. It’s an excellent primer for both reader and writer to test the plausibility of many fictional worlds and their inhabitants."

MICHAEL SUMMERS is a planetary scientist and professor of physics and astronomy at George Mason University. Since 1989, he has served on the mission teams of several NASA space probes in the role of science planning and interpretation of spacecraft observations. He is currently a coinvestigator on the NASA New Horizons mission to the Pluto-Charon double planet, where he serves as the deputy lead of the Atmospheres Theme Team. JAMES TREFIL is Clarence J. Robinson Professor of Physics at George Mason University. He has written more than 50 books on science for a general audience. His writing has won the American Institute of Physics Science Writing Award, the American Association for the Advancement of Science Westinghouse Science Journalism Award, and other honors.
Loading...
or
Not Currently Available for Direct Purchase