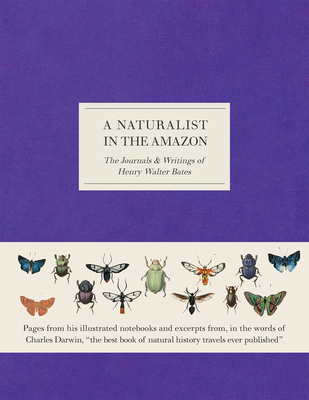 A Naturalist in the Amazon

Beautifully presented facsimile reproductions of the drawings and notes of pioneering entomologist Henry Walter Bates documenting his 11-year-long travels in the Amazon in the mid-1850s.

This charming book showcases the two journals produced by entomologist Henry Walter Bates during his groundbreaking travels and discoveries in the Amazon from 1848 to 1859, on which his classic work The Naturalist on the River Amazon, was based. It includes facsimile reproductions of stunning illustrated pages taken from his Amazon journals, as well as an essay describing his travels. The journals reveal how a self-taught naturalist and butterfly enthusiast had a profound impact on the science of evolution.

Bates, a trusted companion of Alfred Russel Wallace, traveled with him to the Amazon in 1848. There he became fascinated by close similarities in appearance between unrelated butterflies, and discovered a scientific phenomenon we now refer to as Batesian mimicry: species that are highly desirable to predators began evolving to look more like other, more toxic species in order to avoid predation.

Bates spent a total of 11 years in the Amazon; when he returned to England, he had collected, by his own estimate, some 14,000 species of insects, of which no less than 8,000 were previously unknown. This beautiful book offers valuable new insight into the scientific implications and findings of Henry Walter Bates's rich and fruitful time in the Amazon, and it is the ideal book for anyone interested in science, scientific history, and science illustrations.

Praise For A Naturalist in the Amazon: The Journals & Writings of Henry Walter Bates…

NATURE
"The best book of Natural History Travels ever published in England,” said Charles Darwin of entomologist Henry Walter Bates’s 1863 The Naturalist on the River Amazons, an 11-year journal inspired partly by Darwin’s diary of his 1831–36 journey on the HMS Beagle. This enchanting part-facsimile justifies his words. Bates writes grippingly on anacondas, bird-killing spiders and blowpipes. Although little-known now, his name endures in ‘Batesian mimicry’: a survival strategy based on apeing harmful species, which he observed in butterflies.

"This new book presents full-color, life-sized images form the pages of Bates’ first and second Amazon journals, combined with selections from his The Naturalist on the River Amazon; A Record of Adventures, Habits of Animals, Sketches of Brazilian and Indian Life, and Aspects of Nature under the Equator, during Eleven Years of Travel. This new Smithsonian volume offers a vivid introduction into Bates’ explorations, discoveries, and theories, and – as with similar but in-person natural history exhibitions – it is hoped that it will serve to inspire curiosity in many who read it to learn more about one of the Nineteenth Century’s most significant writers in evolutionary biology."

Henry Walter Bates (1825-1892) was an English naturalist and explorer whose theory on Batesian mimicry provided powerful early support for Charles Darwin's theory of evolution by natural selection. His journals documenting this and other important discoveries are held in the collections of the Natural History Museum, London.
Loading...
or
Not Currently Available for Direct Purchase