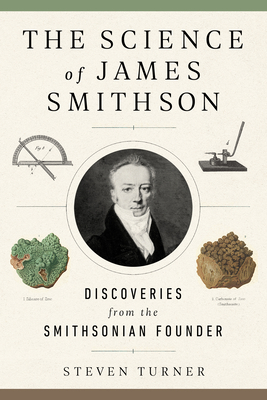 The Science of James Smithson

Discoveries from the Smithsonian Founder

Accessible exploration of the noteworthy scientific career of James Smithson, who left his fortune to establish the Smithsonian Institution.

James Smithson is best known as the founder of the Smithsonian Institution, but few people know his full and fascinating story. He was a widely respected chemist and mineralogist and a member of the Royal Society, but in 1865, his letters, collection of 10,000 minerals, and more than 200 unpublished papers were lost to a fire in the Smithsonian Castle. His scientific legacy was further written off as insignificant in an 1879 essay published through the Smithsonian fifty years after his death--a claim that author Steven Turner demonstrates is far from the truth.

By providing scientific and intellectual context to his work, The Science of James Smithson is a comprehensive tribute to Smithson's contributions to his fields, including chemistry, mineralogy, and more. This detailed narrative illuminates Smithson and his quest for knowledge at a time when chemists still debated thing as basic as the nature of fire, and struggled to maintain their networks amid the ever-changing conditions of the French Revolution and the Napoleonic Wars.

Praise For The Science of James Smithson: Discoveries from the Smithsonian Founder…

WALL STREET JOURNAL
"Although he published close to 30 articles in leading journals, Smithson’s scientific efforts have often been viewed as mere dabbling, busywork with little impact. Not so, exclaims Mr. Turner, a retired curator of physical sciences at the Smithsonian National Museum of American History. To rectify the record, the author re-creates, down to the smallest detail, the experiments Smithson had conducted and written about, using the tools he would have used. The result is a quirky, oddly touching book that allows us to step, for a few moments, inside the world of a practicing Enlightenment scientist, to sit beside him as he fans the flames of a candle with his little blowpipe, waiting for that small mineral in front of him to melt and yield its secrets."

KIRKUS REVIEWS
"After rerunning Smithson’s experiments, a substantial feat in its own right, Turner, a historian of science and emeritus curator of physical sciences at the Smithsonian National Museum of American History, convincingly refutes the charge that his subject was an 'aristocratic science dabbler,' a charge largely based on his interest in practical applications, such as improving the process of coffee-making. [...] Solid insight into the work of a man whose gift undergirds one of the most important U.S. institutions of learning."

LIBRARY JOURNAL
"Seamlessly intertwined with information about scientific and social developments in Europe in the late 18th and early 19th centuries, including facts about important names in geology, chemistry, and mineralogy, this welcome guide will engage readers of science biographies and the history of science."

PUBLISHERS WEEKLY
"Curious readers will appreciate this accessible look at the work of a thoughtful, idealistic scientist."

STEVEN TURNER is a historian of science and retired curator of physical sciences at the Smithsonian National Museum of American History. He has written broadly about the history of American science and scientific instruments. He also developed a deep interest in the Smithsonian's founder and has recreated most of his chemical experiments.
Loading...
or
Not Currently Available for Direct Purchase