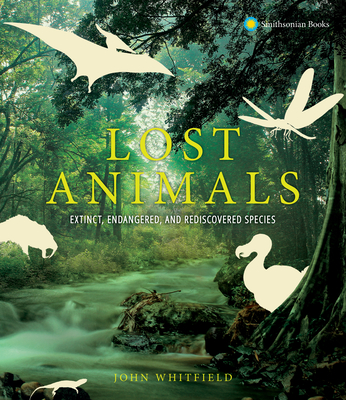 Meet the incredible animals that have disappeared due to competition, mass extinctions, hunting, and human activity.

Lost Animals brings back to life some of the most charismatic creatures to inhabit the planet. It captures the imagination with more than 200 incredible photographs, artworks of fossils, and scientific drawings of charming creatures like dodos, paraceratherium (the largest land mammal), spinosaurus (the biggest carnivorous dinosaur), placeoderm fishes (the sharks of their day), and more!

Lost Animals is a captivating documentation of evolution and extinction. Each chapter focuses on a specific time in Earth's history, from the Cambrian explosion (the most intense surge of evolution the world has ever experienced) to present times, with profiles of the key species that lived then. From long extinct animals to Lazarus species--animals that were thought to be extinct before being rediscovered--this book takes readers on a journey through Earth's natural history, highlighting the world's biggest animal losses and its moments of conservational hope.

"When life on Earth seems caught in turmoil and uncertainty, a look to the past can help gain
perspective. Writer, zoologist, and scientific journalist Whitfield takes readers on a millennia-long
exploration of the planet. Beginning with the earliest animals found in the sea to their emergence
on land and to the sky, he highlights some of Earth’s most resilient, bizarre, and unknown
creatures. Readers will discover the Dickinsonia, a segmented worm-like animal that lived in the
sea about 560 million years ago and is possibly the oldest animal discovered; the Maganuera, a
dragonfly-like insect that had a wingspan over two feet long; and the saber-toothed marsupial
Thylacosmilus. Whitfield organizes the over 500 million years covered here into five periods of
devastating extinction, explaining how "one species’ catastrophe is another’s opportunity. Each
creates space for something new.” He concludes with a look at how humans may be causing a
sixth mass extinction today. This incredibly interesting scientific journey takes a critical look at
the effects of human behavior and what must be done now to change course." — Melissa Norstedt

JOHN WHITFIELD, a PhD in zoology from the University of Cambridge, has written articles for Science, Scientific American, New Scientist, Slate and the London Review of Books in his 20-year career as a science journalist. At the journal Nature, he has covered topics on evolution, ecology, and conservation. John is the author of two popular science books, People Will Talk: The Surprising Science of Reputation and In the Beat of a Heart: Life, Energy and the Unity of Nature.
Loading...
or support indie stores by buying on