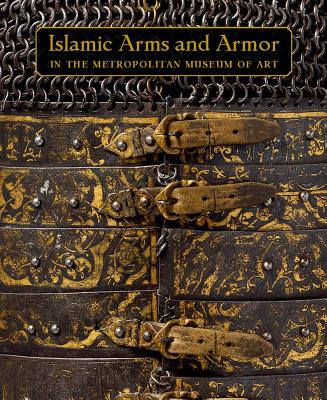 in The Metropolitan Museum of Art

A lushly illustrated survey of exquisitely crafted weapons and armor from the Islamic world, which display extraordinary artistry and opulence

From its origins in the 7th century, armor and weaponry were central to Islamic culture not only as a means of conquest and the spread of faith, but also as symbols of status, wealth, and power. More than 120 exceptional examples from the renowned collection of The Metropolitan Museum of Art are presented in detail to demonstrate the remarkable craftsmanship and beauty of Islamic arms and armor. These diverse objects, which have never been catalogued or published in detail, span ten centuries and represent nearly every Islamic culture, from Spain to the Caucasus. Among these masterpieces are rare early works, such as the oldest documented Islamic sword, and fine examples of decorated helmets and body armor from late-15th-century Iran and Anatolia. Also included are lavish gem-studded weapons from royal courts in the Ottoman world and India. Each piece is handsomely photographed, with a detailed discussion of its technical, historical, and artistic importance. Made by master artisans in conjunction with leading designers, goldsmiths, and jewelers, these stunning objects demonstrate how utilitarian military equipment could be transformed into striking and extravagant works of art.


Praise For Islamic Arms and Armor: in The Metropolitan Museum of Art…

“It has few rivals and will be an important resource for even longer than it took to complete.”—Tim Stanley, Burlington
— Tim Stanley

David G. Alexander is an independent scholar specializing in Islamic arms. Stuart W. Pyhrr is distinguished research curator in the Department of Arms and Armor at The Metropolitan Museum of Art.
Loading...
or
Not Currently Available for Direct Purchase