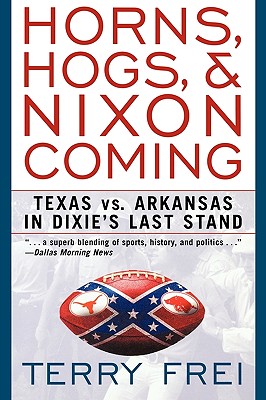 On December 6, 1969, the Texas Longhorns and the Arkansas Razorbacks met in what many consider the game of the century. Both teams were undefeated; both featured devastating and innovative offenses; both boasted stingy defenses; and both were coached by superior tacticians and stirring motivators, Texas's Darrell Royal and Arkansas's Frank Broyles. Moreover, President Richard Nixon was on hand to present his own national championship plaque to the winners. Even if it had been just a game, it would have been memorable today. But it was much more, because nothing was so simple in December 1969. In Horns, Hogs, & Nixon Coming, Terry Frei deftly weaves the social, political, and athletic trends together for an unforgettable look at one of the landmark college sporting events of all time.

Terry Frei is a columnist for the Denver Post, and regularly contributes articles to ESPN.com and The Sporting News. He lives in Denver.
Loading...
or support indie stores by buying on