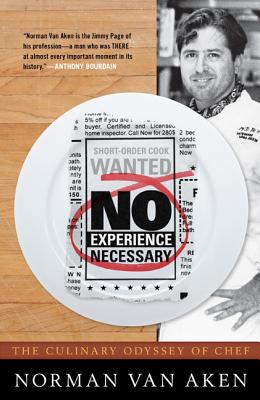 No Experience Necessary is Chef Norman Van Aken's joyride of a memoir. In it he spans twenty-plus years and nearly as many jobs--including the fateful job advertisement in the local paper for a short-order cook with "no experience necessary." Long considered a culinary renegade and a pioneering chef, Van Aken is an American original who chopped and charred, sweated and seared his way to cooking stardom with no formal training, but with extra helpings of energy, creativity, and faith. After landing on the deceptively breezy shores of Key West, Van Aken faced hurricanes, economic downturns, and mercurial moneymen during the decades when a restaurant could open and close faster than you can type haute cuisine. From a graveyard shift grunt at an all-night barbeque joint to a James Beard-award finalist for best restaurant in America, Van Aken put his trusting heart, poetic soul, natural talent, and ever-expanding experience into every venture--and helped transform the American culinary landscape along the way. In the irreverent tradition of Anthony Bourdain's Kitchen Confidential, and populated by a rogues' gallery of colorful characters--including movie stars, legendary musicians, and culinary giants Julia Child, Emeril Lagasse, and Charlie Trotter--No Experience Necessary offers a uniquely personal, highly-entertaining under-the-tablecloth view of the high-stakes world of American cuisine told with wit, insight, and great affection by a natural storyteller.

Norman Van Aken is known as the founding father of New World Cuisine, a celebration of Latin, Caribbean, Asian, African, and American flavors. He is also known internationally for introducing the concept of "Fusion" to the culinary world. Van Aken is the only Floridian inducted into the prestigious James Beard "Who's Who in American Food and Beverage"; his restaurant, Norman's, was nominated as a finalist for the James Beard Foundation's "Best Restaurant in America." He has also been a James Beard Foundation semi-finalist for "Best Chef in America." Van Aken has published five cookbooks: Feast of Sunlight, The Exotic Fruit Book, Norman's New World Cuisine, New World Kitchen, and My Key West Kitchen (with Justin Van Aken). He lives in Miami, Florida.
or
Not Currently Available for Direct Purchase
Copyright © 2020 American Booksellers Association