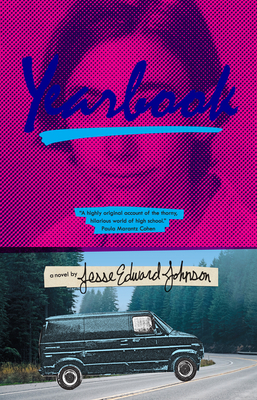 It's 1996, senior year of high school has just begun, and Lester is at a total loss. He should be studying and making plans for life after graduation. (His best friend, Freesia, is applying to 37 colleges.) Instead, he wanders the back roads of his small town on the Puget Sound, visiting the local beaches and ignoring all his schoolwork. His father recently abandoned the family, his mother is more than slightly distracted, and his younger sister, Grace, is finding it hard to adjust to both their new family situation and ninth grade.

But Lester is smart and funny, and despite his general apathy, he does feel strongly about a few things: he loves his friends, Milton's Paradise Lost, the Ramones, and the yearbook arts, as he calls them. Eventually he even comes to appreciate Mr. Traversal, the new Yearbook teacher who prefers that students call him by his first name, Jeff. When Lester and Jeff run afoul of the school's insufferable interim principal, they come up with a plan to create an underground yearbook. This renegade project and Jeff's unlikely mentorship provide the spark that helps Lester to accept his past and to give his future a second chance.

From bright new talent Jesse Edward Johnson comes this hilarious and moving debut novel about learning to believe in yourself again. Whether you have yet to start high school or you graduated decades ago, you're sure to love Yearbook and the whip-smart Lester Smith.

Lester Smith, the unlikely hero of this coming-of age story, captivates even as he infuriates. He's snarky and smart and will totally break your heart. For fans of John Green and Rainbow Rowell, Yearbook is your next favorite read.--T. Greenwood, author of Where I Lost Her, Two Rivers, and Bodies of Water

Jesse Edward Johnson's Yearbook is a highly original account of the thorny, hilarious world of high school. Set in 1996 but entirely in sync with contemporary adolescent angst and hijinks, the novel centers on the emotional development of its narrator Lester Smith, a jaded smart-aleck--part Holden Caulfield, part contemporary hipster...Yearbook is an exceptional rendering of a vexed period in our growing up, an exploration of the mildly unhinged adolescent mind as it finds a measure of peace and equanimity.--Paula Marantz Cohen, author of Jane Austen in Boca and Suzanne Davis Gets a Life

"Yearbook takes us on an unforgettable journey into the senior year of high school teen angst...Compellingly told, brilliant in its ventriloquistic ability to capture the teens' voices, this tale compels the reader to fall in love with these students' raw desire and sheer ecstasy." --Scott Driscoll, author of Better You Go Home

"Oh man, what a charming and deeply enjoyable novel...Lester is the perfect guide back to that bittersweet era known as the senior year of high school--a time shot-through with joy and agony, as life pivots decisively away from adolescence. And what a great motif Johnson's found in the yearbook itself, that nostalgia-packing dispatch from the past." --Peter Mountford, author of A Young Man's Guide to Late Capitalism and The Dismal Science

With Yearbook, Johnson does his part to stamp out boring art, one sentence at a time.--John Baldessari

Jesse Edward Johnson is a writer and artist based in the Pacific Northwest. He has a Ph.D. in English from UCLA, where he taught literature for five years. He has taught at Richard Hugo House in Seattle, and at San Quentin Prison. Yearbook is his first novel.

Jesse Edward Johnson is a writer and artist based in the Pacific Northwest. He has a Ph.D. in English from UCLA, where he taught literature for five years, and a B.A. in English from UC Berkeley. He has taught writing to inmates at San Quentin Prison and at Richard Hugo House in Seattle. Yearbook is his first novel. For more information about Jesse's work and ongoing projects, please visit jesseedwardjohnson.com.
Loading...
or support indie stores by buying on