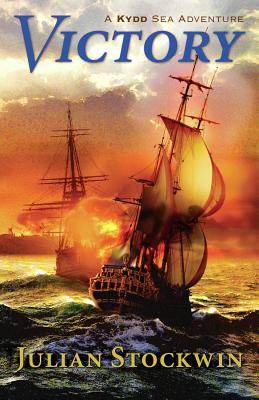 In the 11th book of this popular series, Napoleon Bonaparte continues planning for the invasion of England as Admiral Horatio Nelson and the Royal Navy patrol the seas, seeking out their elusive enemy. When convoluted political machinations in England lead to the impeachment of the head of the Navy, Commander Thomas Kydd is forced to choose sides. Eager to take on the real enemy, Kydd decides to join Nelson’s squadron just before the Battle of Trafalgar, the greatest sea encounter of all time. Amidst the chaos and bloodshed, Kydd and his shipmates must prove once and for all that the Royal Navy truly rules the seas.

“Stockwin’s richly detailed . . . portrait of life on ship and shore in Britain’s oceanic empire is engrossing. He writes evocatively of shipboard routine, the panic and confusion of combat, and the terrifying approach of a storm at sea, and he knows how to stage enthralling action scenes.”  —Publisher’s Weekly

“Stockwin continues to display his talents in transporting his audience from the 21st century to the chaotic worlds of Kydd, Renzi, and their imperiled homeland . . . He captures Georgian society and the closed world of a Royal Navy warship . . . [and] goes into action with swords drawn and cannons and carronades blasting.”  —Historical Novels Review

Julian Stockwin is a retired lieutenant commander of the Royal Navy Reserve. He entered the British Navy at age 15 and was eventually named a Member of the British Empire. He is the author of the Kydd Sea Adventures series.