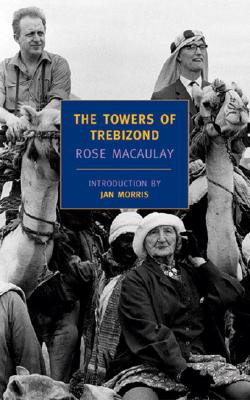 The Towers of Trebizond

"'Take my camel, dear,' said my aunt Dot, as she climbed down from this animal on her return from High Mass." So begins The Towers of Trebizond, the greatest novel by Rose Macaulay, one of the eccentric geniuses of English literature. In this fine and funny adventure set in the backlands of modern Turkey, a group of highly unusual travel companions makes its way from Istanbul to legendary Trebizond, encountering potion-dealing sorcerers, recalcitrant policemen, and Billy Graham on tour with a busload of Southern evangelists. But though the dominant note of the novel is humorous, its pages are shadowed by heartbreak—as the narrator confronts the specters of ancient empires, religious turmoil, and painful memories of lost love.


Praise For The Towers of Trebizond…

"Rose Macaulay’s The Towers of Trebizond is an utter delight, the most brilliantly witty and captivatingly charm-ing book I have read since I can’t remember when… . Fantasy, farce, high comedy, lively travel material, delicious japes at many aspects of the frenzied modern world, and a succession of illuminating thoughts about love, sex, life, organized churches and religion are all tossed together with enchanting results." —The New York Times

"Novelist, poet, journalist, wit, and world-class diner out, Rose Macaulay was one of the most popular writers and personalities in England from the 1920s until her death, in 1958. The ebullient Macaulay was friends, it seemed with everyone. Rupert Brooke, Gilbert Murray, Harold Nicolson, John Betjeman, and Virginia Woolf were only a few of those who prized an intelligence that, though 'acid,' in Nicolson’s words, was 'citrous merely and never poisoned.'” —Brooke Allen, The Atlantic Monthly

Rose Macaulay (1881-1958) was born in Rugby, England, into a family of eminent scholars and Anglican clerics. The second of seven children, a tomboy who hoped one day to join the Navy, she spent much of her childhood in Varezze, a small Italian seaside town, where she enjoyed considerable independence for an English child of her era. In 1894, her family returned to Britain, and after studying modern history at Somerville College, Oxford, she began a career as a writer and quickly succeeded in supporting herself as a novelist, journalist, and critic. During World War I, she worked as a nurse and as a civil servant in the War Office before assuming a position in the British Propaganda Department. There she met Gerald O'Donovan, a sometime Irish Catholic priest, novelist, and married man, with whom she had a romantic relationship which was to last until his death in 1942. Rose Macaulay was the author of thirty-five books--twenty-three of them novels--and is best remembered for Potterism, a satire of yellow journalism; a biography of Milton; her haunting post-World War II novel, "The World My Wilderness;" two travel books, "They Went to Portugal" and "Fabled Shore;" and her masterpiece, "The Towers of Trebizond." A mentor to Elizabeth Bowen and a friend to such luminaries as Ivy Compton-Burnett, Rupert Brooke, E.M. Forster, and Rosamond Lehmann, Macaulay was a well-known figure in London's literary world and a fabled wit. She was named a Dame Commander of the British Empire shortly before her death in 1958.

Jan Morris was born in 1926, is Anglo-Welsh, and lives in Wales. She has written some forty books, including the "Pax Britannica" trilogy about the British Empire, studies of Wales, Spain, Venice, Oxford, Manhattan, Sydney, Hong Kong, and Trieste, six volumes of collected travel essays, two memoirs, two capricious biographies, and a couple of novels--but she defines her entire oeuvre as "disguised autobiography." She is an honorary D.Litt. of the University of Wales and a Commander of the Order of the British Empire.
Loading...
or
Not Currently Available for Direct Purchase