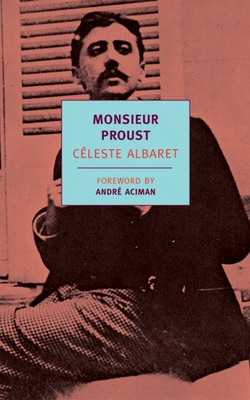 Céleste Albaret was Marcel Proust's housekeeper in his last years, when he retreated from the world to devote himself to In Search of Lost Time. She could imitate his voice to perfection, and Proust himself said to her, "You know everything about me." Her reminiscences of her employer present an intimate picture of the daily life of a great writer who was also a deeply peculiar man, while Madame Albaret herself proves to be a shrewd and engaging companion.

Céleste Albaret (1892-1984) was born into a peasant family in the mountainous region of Lozère, France. In 1913, she married Odilon Albaret, a Parisian chauffeur, whose clients included Marcel Proust. Odilon suggested that his new wife, who was lonely in the big city and at a loss for something to do, run errands for Proust, and before long Céleste found herself employed as the writer’s full-time (indeed round-the-clock) housekeeper, secretary, and nurse, filling those roles until his death in 1922. In later years, Céleste ran a small hotel in Paris with her husband and daughter, and after Odilon’s death in 1960, she became the caretaker of the Musée Ravel in the town of Montfort l’Amaury. Monsieur Proust was published in 1972. In recognition of her decade-long service to Proust, Céleste Albaret was made a commander of the French Order of Arts and Letters. She died of emphysema at the age of 92.

"Published in 1973, Monsieur Proust is a remarkable evocation of the spiritual sacrifices and flashes of grace that inform genius and those who serve it." — Hilton Als, The New Yorker

"A fond and winning picture of the daily life of a great writer and reclusive man, with his foibles, worries and kindnesses. This alluring volume is as close as we can come to meeting Marcel Proust in person." — Sunday Telegraph

"Monsieur Proust is moving, often unwittingly funny, [and it conveys] something of the fabulous quality of an existence literally held in thrall by Proust. The book is rich in concrete and, one feels, authentic details that give an unprecedented and entertaining picture of Proust’s daily life." — Germaine Brée, The New Republic