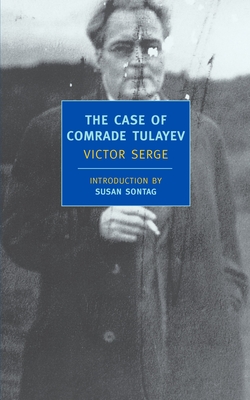 The Case of Comrade Tulayev

One cold Moscow night, Comrade Tulayev, a high government official, is shot dead on the street, and the search for the killer begins. In this panoramic vision of the Soviet Great Terror, the investigation leads all over the world, netting a whole series of suspects whose only connection is their innocence—at least of the crime of which they stand accused. But The Case of Comrade Tulayev, unquestionably the finest work of fiction ever written about the Stalinist purges, is not just a story of a totalitarian state. Marked by the deep humanity and generous spirit of its author, the legendary anarchist and exile Victor Serge, it is also a classic twentieth-century tale of risk, adventure, and unexpected nobility to set beside Ernest Hemingway's For Whom the Bell Tolls and André Malraux's Man's Fate.

Praise For The Case of Comrade Tulayev…

One of the great 20th-Century Russian novels…there are extraordinary passages of natural description, a beauty that defies what takes place within it.
— Nicholas Lezard, The Guardian

The brilliance of his novel utterly ineluctable as it sweeps across 1930’s Europe from the gulags to the Kremlin, to Paris and to Barcelona.
— The Times (London)

The Case of Comrade Tulayev is gritty and rough, saturated in the squalor of Moscow life; but it also pulses with lyrical flights that take us up into the stars, which represent for Serge the regenerative, transformative moments the History promises but has yet to deliver. Tulayev is infused with mysticism; it is a work of cosmic longing, as if Serge is turning to the eternity of the universe itself to avoid the utter despair right in front of his face.
— Matthew Price, Bookforum

It is a protest novel no less significant and no more dated than Solzhenitsyn’s One Day in the Life of Ivan Denisovich. These novels recreate the feel of daily existence years ago, animate the history texts, and give readers an irreplaceable personal perspective. Books like these ensure the past is not forgotten….The quality of life depicted in The Case of Comrade Tulayev showed why the Stalinist monolith could not endure.
— Joe Auciello, Socialist Action

Given the standard of fortitude, and given the contempt Serge always felt for Stalin’s collaborators, a remarkable feature of The Case of Comrade Tulayev is its chiaroscuro….That Serge intended no lenience here we may be sure, but we may likewise be sure that he would never have swallowed the later euphemisms and half-truths of Khrushchev, putting blame for all the enormities of an epoch on the evil of a single individual.
— Christopher Hitchens, The Atlantic Monthly

Serge can recognize the range of experience and responses that make up the texture of life in even the most nightmarishly repressive system.
— Scott McLemee

Victor Serge (1890–1947) was born Victor Lvovich Kibalchich to Russian anti-Tsarist exiles, impoverished intellectuals living “by chance” in Brussels. A precocious anarchist firebrand, young Victor was sentenced to five years in a French penitentiary in 1912. Expelled to Spain in 1917, he participated in an anarcho-syndicalist uprising before leaving to join the Revolution in Russia. Detained for more than a year in a French concentration camp, Serge arrived in St. Petersburg early in 1919 and joined the Bolsheviks, serving in the press services of the Communist International. An outspoken critic of Stalin, Serge was expelled from the Party and arrested in 1929. Nonetheless, he managed to complete three novels (Men in Prison, Birth of Our Power, and Conquered City) and a history (Year One of the Russian Revolution), published in Paris. Arrested again in Russia and deported to Central Asia in 1933, he was allowed to leave the USSR in 1936 after international protests by militants and prominent writers like André Gide and Romain Rolland. Using his insider’s knowledge, Serge published a stream of impassioned, documented exposés of Stalin’s Moscow show trials and of machinations in Spain, which went largely unheeded. Stateless, penniless, hounded by Stalinist agents, Serge lived in precarious exile in Brussels, Paris, Vichy France, and Mexico City, where he died in 1947. His classic Memoirs of a Revolutionary and his great last novels, Unforgiving Years and The Case of Comrade Tulayev (both available as NYRB Classics), were written “for the desk drawer” and published posthumously.

Susan Sontag (1933–2004) was a novelist, playwright, filmmaker, and one of the most influential critics of her generation. Her books include Against Interpretation, On Photography, Illness as Metaphor, and The Volcano Lover.
Loading...
or
Not Currently Available for Direct Purchase