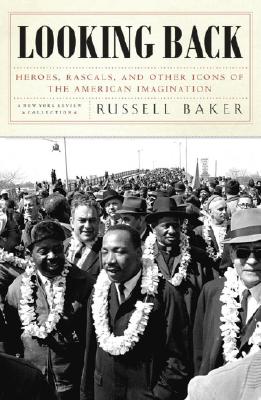 From his youthful days as a delivery boy for William Randolph Hearst’s Baltimore newspapers through his many years as a journalist and commentator, Russell Baker has been a keen observer of American politics and culture. Now, in these eleven essays, all originally published in The New York Review of Books, he looks back on a group of iconic public figures from his own past.

Profiled here are presidents (Lyndon Johnson feuding with Robert F. Kennedy, and Richard Nixon in his grasping, spectral exile), would-be presidents (Eugene V. Debs and Barry Goldwater, “gentlemen fallen among brutes”), and those who set their sights on something besides the presidency (Joe DiMaggio, and Martin Luther King, “the one indisputably great American of the century’s second half”).

Undeluded by the roar of what he calls “our national engines of ballyhoo, bushwah, and baloney,” Russell Baker reflects on the strange fascination that these larger-than-life characters have held for the American imagination. With an elegiac yet shrewd sense of their accomplishments both enduring and ephemeral, he traces the impressions they left on twentieth-century America—and on him.

Praise For Looking Back…

"[Baker displays] an unflinching desire to observe lives as they were actually lived, not as they were created by Hollywood."
— The Boston Globe

"Baker wrote wonderfully, with perfect, witty sentences that could make you stop and read them again."
— The Boston Globe

"[Baker has] scholarly erudition, stylistic flair, and an ability to sweep through all manner of culture high and low that recalls writers like Edmund Wilson and George Orwell."
— Boston Phoenix

Russell Baker is a former columnist and correspondent for The New York Times and The Baltimore Sun. His books include The Good Times, Growing Up, and Looking Back.
Loading...
or
Not Currently Available for Direct Purchase