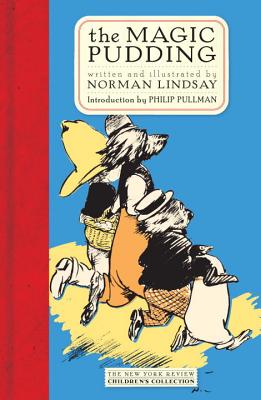 The Magic Pudding is a pie, except when it's something else, like a steak, or a jam donut, or an apple dumpling, or whatever its owner wants it to be. And it never runs out. No matter how many slices you cut, there's always something left over. It's magic.

But the Magic Pudding is also alive. It walks and it talks and it's got a personality like no other. A meaner, sulkier, snider, snarlinger Pudding you've never met.

So Bunyip Bluegum (the koala bear) finds out when he joins Barnacle Bill (the sailor) and Sam Sawnoff (the penguin bold) as members of the Noble Society of Pudding Owners, whose "members are required to wander along the roads, indulgin' in conversation, song and story, and eatin' at regular intervals from the Pudding." Wild and woolly, funny and outrageously fun, The Magic Pudding stands somewhere between Alice in Wonderland and The Stinky Cheese Man as one of the craziest books ever written for young readers.

Praise For The Magic Pudding…

"I think it’s the funniest children’s book ever written.  One of the great strengths of the book is its illustration, by Lindsay himself. He was best known as a visual artist, producing thousands of paintings, etchings, drawings, and sculptures, but his pictures for The Magic Pudding are his best work, in my view. They are so vigorous and absurd, so strongly characterized and brilliantly detailed, that my eye delights in them still.”—  Philip Pullman on his favorite children’s book, Publishers Weekly, December 2015

“The Magic Pudding . .. is one of my all-time favourite children’s books – an unmissable read for anyone who has not already encountered it … The New York Review’s Children’s collection is full of such choice reprints that I would gladly have every one of their publications on my shelves.” —Kate Kellaway, The Guardian (UK)

"A robust fantasy, The Magic Pudding was first published in 1918 but shows few signs of its age. It’s part of a handsome, new collection of reprints, published by The New York Review of Books, aimed at rescuing neglected children’s classics from 'the dustbins of history'. There’s no dust on Lindsay’s quirky tale about the adventures of Bunyip Bluegum, an irrepressible, polite young koala. He meets various eccentric characters who bust into song and rhyme. In the introduction to the new edition, Philip Pullman, author of The Amber Spyglass, calls Lindsay’s work 'the funniest children’s book ever written…You can feel Lindsay carried away on the wings of his own energy'.”
— USA Today, “Holiday Books”

"The illustrations are great fun, the characters burst into comic verse at the drop of a hat, and it’s hard to resist."
— The Horn Book

"The book is full of songs that pitch along like boats on a rough sea. The tremendous black and white drawings are full of ne’er do well character…It is an outrage that it is not on every English family’s menu."
— The Observer

Norman Lindsay (1879-1969) was born in Victoria, Australia, the fifth of ten children, several of whom grew up to be artists. At age seventeen, he left home and traveled to Melbourne, where he found work as an illustrator. Famously prolific in many mediums, Lindsay produced countless oil paintings, drawings, etchings, and watercolors, as well as eleven novels. He was famous, too, for the countless controversies he happily provoked throughout his long life. As his granddaughter later explained: “He fought the wowsers, he fought the hypocrites, the people that were going to stop and stifle creative freedom, freedom of speech, freedom of thought.”
Norman Lindsay’s home is now a museum of his works run by Australia’s National Trust. After entertaining generations of young Australians, The Magic Pudding is recognized as a classic of children’s literature, and in 2000 a sculpture of Bunyip Bluegum and friends (including the Puddin’ itself) was unveiled as the centerpiece of the children’s garden at the Royal Botanic Gardens in Melbourne.

Philip Pullman is the author of the trilogy His Dark Materials, the third book of which, The Amber Spyglass, was the first children’s book to win the Whitbread Book of the Year Award in the UK. He spent part of his childhood in Australia, where he first encountered The Magic Pudding. He now lives and works in Oxford, England.
Loading...
or
Not Currently Available for Direct Purchase