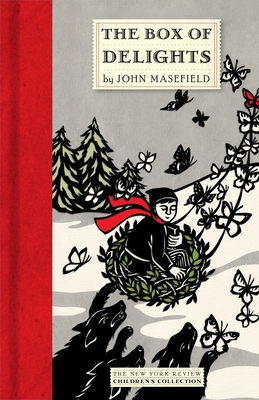 Strange things begin to happen the minute young Kay Harker boards the train to go home for Christmas and finds himself under observation by two very shifty-looking characters. Arriving at his destination, the boy is immediately accosted by a bright-eyed old man with a mysterious message: “The wolves are running.” Soon danger is everywhere, as a gang of criminals headed by the notorious wizard Abner Brown and his witch wife Sylvia Daisy Pouncer gets to work. What does Abner Brown want? The magic box that the old man has entrusted to Kay, which allows him to travel freely not only in space but in time, too. The gang will stop at nothing to carry out their plan, even kidnapping Kay’s friend, the tough little Maria Jones, and threatening to cancel Christmas celebrations altogether. But with the help of his allies, including an intrepid mouse, a squadron of Roman soldiers, the legendary Herne the Hunter, and the inventor of the Box of Delights himself, Kay just may be able rescue his friend, foil Abner Brown’s plot, and save Christmas, too.

At once a thriller, a romp, and a spellbinding fantasy, The Box of Delights is a great English children’s book and a perfect Christmas treat.

John Masefield (1878—1967) was an English poet and writer, and Poet Laureate of the United Kingdom from 1930 until his death. He is remembered as the author of the classic children's novels The Midnight Folk and The Box of Delights, two novels Captain Margaret and Multitude and Solitude and a great deal of poetry, including his anthology Saltwater Ballads.

Praise For The Box of Delights (Kay Harker)…

“This witty and wonderful children’s novel by the onetime Poet Laureate of the UK is widely beloved on the other side of the pond, but lesser known here. A travesty, that, since it’s a magic box in itself: a magical adventure that begins with a boy on his way home for Christmas, stopped by a man who implores him, 'And now, Master Harker, of Seekings, now that the Wolves are Running, as you will have seen, perhaps you would do something to stop their Bite?' Enter wizards and witches, mice, Roman soldiers, the toughest little girl you’ll ever meet, and Christmas just might be saved after all.” —Flavorwire

“The book that always had the magic of a snowy English Christmas…. It’s still a lovely book, magical and funny, to be read by anybody of any age.” —The Horn Book


"This classic of English children's literature, sadly overlooked by most on this side of the Atlantic, has just been reissued in a beautiful edition by the New York Review Children's Collection...Although "The Box of Delights" was first published in 1935, Masefield's intoxicating prose has lost none of its pull...in this wonderful tale of bravery and intrigue that deserves to become another staple of the holidays." --The San Francisco Chronicle

"First published in 1935, The Box of Delights by John Masefield is newly available. In the adventure-laden Christmas story, Kay Harker (also the protagonist of Masefield's The Midnight Folk) returns from boarding school for the holidays and becomes involved in a struggle with a wizard and witch who wish to possess the eponymous box." --Publishers Weekly

"This uniquely imaginative tale would be a delight for fans of old-fashioned, English Literature and could be compared to the likes of A Christmas Carol and the Lion the Witch and the Wardrobe." --CLEAR Reviews

“[Masefield’s] most popular children’s book…Original and remarkable.” –The New York Review of Books

“Every chapter in this book is marvelous, but the real delight derives from Masefield’s style and the idiosyncratic, colorful speech of his various characters…Lovely stuff.” –The Washington Post

“Masefield the children’s writers is unbeatable.” –The Daily Telegraph (UK)