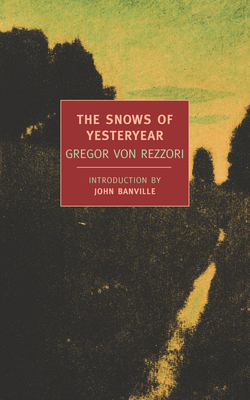 The Snows of Yesteryear

Gregor von Rezzori was born in Czernowitz, a onetime provincial capital of the Austro-Hungarian Empire that was later to be absorbed successively into Romania, the USSR, and the Ukraine—a town that was everywhere and nowhere, with a population of astonishing diversity. Growing up after World War I and the collapse of the empire, Rezzori lived in a twilit world suspended between the formalities of the old nineteenth-century order which had shaped his aristocratic parents and the innovations, uncertainties, and raw terror of the new century. The haunted atmosphere of this dying world is beautifully rendered in the pages of The Snows of Yesteryear.

The book is a series of portraits—amused, fond, sometimes appalling—of Rezzori’s family: his hysterical and histrionic mother, disappointed by marriage, destructively obsessed with her children’s health and breeding; his father, a flinty reactionary, whose only real love was hunting; his haughty older sister, fated to die before thirty; his earthy nursemaid, who introduced Rezzori to the power of storytelling and the inevitability of death; and a beloved governess, Bunchy. Telling their stories, Rezzori tells his own, holding his early life to the light like a crystal until it shines for us with a prismatic brilliance.

Praise For The Snows of Yesteryear…

"One of those rare and lovely books that defy category. Fiction and non-fiction meet in the precision and quality of Rezzori's prose, in his passion for the perfect detail, and in his power to capture the reader's heart."-Alan Furst

“Von Rezzori's best-known novel, Memoirs of an Anti-Semite, and his recent memoir, The Snows of Yesteryear, were works of sly, silky lyricism filled with sharp detail and a deft, ironic moral weight. Above all they offered marvelous character-portraits in prose, with the novel wryly evoking the women who shaped its narrator's sensual and intellectual life and the memoir giving an indelible account of von Rezzori's tragicomically dysfunctional family as it weathered the cataclysms of a war-stricken Europe.” –Washington Post

The Snows of Yesteryear “leads into a world now irretrievably lost, its values blown away by World War I and its fortures wrecked by the inflationary ‘20s…Strong material, then; and Rezorri follows this family back with a fine disdain for sentiment, a transparency of feeling, an acid sense of humor and a vigilant eye for nuances of love and indifference, language, landscape and class behavior. It is not a young man’s (or a moralist’s) book. But it is intensely moving and contains, in its winding and ironic cadences, not a slack sentence.” –Time magazine

“Writing in lyrical, allusive prose–elegantly translated from the German by H. F. Broch de Rothermann–Mr. von Rezzori uses his portraits…to create a book that is, at once, an autobiography and a picture of a vanished age…The Snows of Yesteryear reveals its author’s rich pictorial imagination, his seemingly total recall, his gift for revealing character through anecdotes colored by memory…His book remains both an elegiac tribute to a receding past and a testament to the redemptive powers of memory–a family photography album, beautifully translated into words.” –Michiko Kakutani, The New York Times

“The Snows of Yesteryear is a classic which bears comparison in its artistic integrity with Nabakov’s Speak, Memory and Sarte’s Les Mots.” –The Independent (London)

“The Snows of Yesteryear is autobiography as portraiture…Each portrait is a miniature of the Bukovinian past.” –The New York Review of Books

“If any individual life could encapsulate the geographic and psychic dislocation that has been the central experience of the 20th century, that life might be Gregor von Rezzori’s…Rezzori has explored the consequences of this century’s disruptions in a series of remarkable books…The Death of My Brother Abel, Memoirs of an Anti-Semite, and The Snows of Yesteryear.” –Newsday

“[Memoirs of an Anti-Semite and The Snows of Yesteryear are] works sly, silky lyricism filled with sharp detail and a deft, ironic moral weight. Above all they offered marvelous character-portraits in prose.” –The Washington Post

“The weight of history lies heavily on the people of Central Europe; this powerful memoir shows us how painful that weight can be.” –Newsday

"Dazzling prose, humane insights and good humor…[Rezzori] has created, not simply recorded a memoir of growing up in the linguistic and political no-man's-land of interbellum central Europe." –Boston Globe

“The iconoclastic author of Memoirs of an Anti-Semite and The Death of My Brother Abel mulls over his childhood. Like Elias Canetti, a modern Homer of Central European aristocracy, Rezzori frames the past like a classicist, feels it like a tormented youth.” –Philadelphia Inquirer

“The Snows of Yesteryear is a classic which bears comparison in its artistic integrity with Nabokov's Speak, Memory and Sartre's Les Mots.” –The Independent (London)

Intensely moving...with a fine disdain for sentiment, a transparency of feeling, an acid sense of humor and a vigilant eye for nuances of love and indifference, language, landscape, and class behavior.
— Robert Hughes, Time

Gregor von Rezzori (1914–1998) was born in Czernowitz (now Chernovtsy, Ukraine), Bukovina, then part of the Austro-Hungarian Empire. He later described his childhood in a family of declining fortunes as one “spent among slightly mad and dislocated personalities in a period that also was mad and dislocated and filled with unrest.’’ After studying at the University of Vienna, Rezzori moved to Bucharest and enlisted in the Romanian army. During World War II, he lived in Berlin, where he worked as a radio broadcaster and published his first novel. In West Germany after the war, he wrote for both radio and film and began publishing books at a rapid rate, including the four-volume Idiot’s Guide to German Society and Ein Hermelin in Tschernopol (to be published by NYRB Classics as Ermine). From the late 1950s on, Rezzori had parts in several French and West German films, including one directed by his friend Louis Malle. In 1967, after spending years classified as a stateless person, Rezzori settled in a fifteenth-century farmhouse outside of Florence with his wife, gallery owner Beatrice Monti. There he produced some of his best-known works, among them Death of My Brother Abel, Memoirs of an Anti-Semite (published by NYRB Classics), and the memoir The Snows of Yesteryear: Portraits for an Autobiography.

John Banville was born in Wexford, Ireland, in 1945. He is the author of many novels, including The Book of Evidence, The Untouchable, and Eclipse. Banville’s novel The Sea was awarded the 2005 Man Booker Prize. On occasion he writes under the pen name Benjamin Black.
or support indie stores by buying on