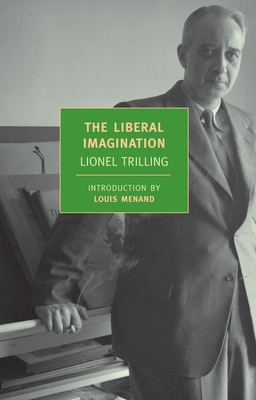 The Liberal Imagination is one of the most admired and influential works of criticism of the last century, a work that is not only a masterpiece of literary criticism but an important statement about politics and society. Published in 1950, one of the chillier moments of the Cold War, Trilling’s essays examine the promise —and limits—of liberalism, challenging the complacency of a naïve liberal belief in rationality, progress, and the panaceas of economics and other social sciences, and asserting in their stead the irreducible complexity of human motivation and the tragic inevitability of tragedy. Only the imagination, Trilling argues, can give us access and insight into these realms and only the imagination can ground a reflective and considered, rather than programmatic and dogmatic, liberalism.

Writing with acute intelligence about classics like Huckleberry Finn and the novels of Henry James and F. Scott Fitzgerald, but also on such varied matters as the Kinsey Report and money in the American imagination, Trilling presents a model of the critic as both part of and apart from his society, a defender of the reflective life that, in our ever more rationalized world, seems ever more necessary—and ever more remote.

Praise For The Liberal Imagination…

“The Liberal Imagination (1950) applied the dialectical method to cultural themes by exploring the ways in which literary masterworks deflated the pieties of trendy left-wing politics. Trilling, who identified himself as a liberal, called for a new kind of criticism that 'might find its most useful work not in confirming liberalism in its sense of general rightness but rather in putting under some degree of pressure the liberal ideas and assumptions of the present time.' That statement was almost a blueprint, or prophecy, of the neoconservative creed.” –The New York Times

“Trilling’s best and most influential collection of essays shows how criticism, written with grace, style, and a self-questioning cast of mind, can itself become a form of literature, as well as a valuable contribution to how we think about society.” –Morris Dickstein

“A literary critic of major stature.” –The Times (London)

“The essays in [The Liberal Imagination] are remarkable for persuasiveness with which they draw attention to the importance for much, if not all great literature, of the tragic, the ironic, and the basically unjust elements in life.” –The Times (London)

"The Liberal Imagination, [is] a book that sold more than seventy thousand copies in hardcover and more than a hundred thousand in paperback, and that made Trilling a figure, a model of the intellectual in Cold War America... The argument of The Liberal Imagination is that literature teaches that life is not so simple for unfairness, snobbery, resentment, prejudice, neurosis, and tragedy happen to be literature's particular subject matter." --Lewis Menand, The New Yorker

“Lionel Trilling...is undergoing a slow but effective resurgence...everything suggest that both his persona and oeuvre are attracting a young generation of scholars eager to understand his echoes, present and future.” –Forward

“One felt that the essays of The Liberal Imagination were helping to generate a new kind of discourse; in them the traditional disparities between English and American ways of discussing both literature and society were being transcended. The specific means of this transcendence had largely to do with the intensity and luminosity of Trilling’s mind...” –The New York Times Book Review

The author "shows that literature is relevant to politics not because it affirms any political doctrine but because it provides a corrective to any political ideology whatsoever." –Intercollegiate Studies Institute (ISI)

“Lionel Trilling was so compelling that he mesmerized many of his Columbia students for life, away from what he regarded as the illusions about progress fostered by the liberal imagination.” –Los Angeles Times

“One of the most important literary critics of mid-20th century America.” –The Wall Street Journal

“This liberal critic of liberalism was revered for his reasonableness, the elegance of his dialectical style, the refinement of his ideas.” –The New York Times

“After his death, Lionel Trilling still exerts great influence on the landscape of American culture.” –The New York Times

“‘The Function of the Little Magazine’ is as enchanting as when it first appeared in 1946 and remains a superior lesson on the juxtaposition of the highbrow intellectual elite and a democratic mass audience.” –Foreword

“The dialectical method at its peak, honed to revelatory art.” –Sam Tanenhaus

Lionel Trilling (1905–1975) was born in New York and educated at Columbia University, to which he returned as an instructor in 1932, and where he continued to teach in the English Department throughout his long and highly distinguished career as a literary critic. Among the most influential of his many works are three collections of essays, The Liberal Imagination, The Opposing Self, and Beyond Culture; a collection of lectures, Sincerity and Authenticity; a critical study of E.M. Forster; and one novel, The Middle of the Journey (available as an NYRB Classic). The Journey Abandoned, an unfinished novel, was published posthumously in 2008. Lionel Trilling was married to the writer and critic Diana Trilling.

Louis Menand is the Anne T. and Robert M. Bass Professor of English at Harvard University, and a staff writer at The New Yorker. He is the author of Discovering Modernism, The Metaphysical Club and American Studies.
Loading...
or support indie stores by buying on
(This book is on backorder)