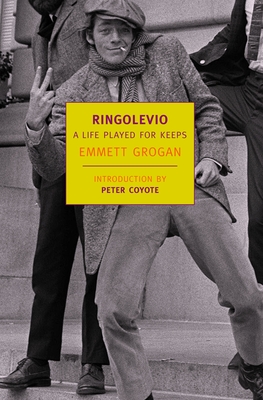 A Life Played for Keeps

Ringolevio is a classic American story of self-invention by one of the more mysterious and alluring figures to emerge in the 1960s. Emmett Grogan grew up on New York City’s mean streets, getting hooked on heroin before he was in his teens, kicking the habit and winning a scholarship to a swanky Manhattan private school, pursuing a highly profitable sideline as a Park Avenue burglar, then skipping town to enjoy the dolce vita in Italy. It’s a hard-boiled, sometimes hard-to-believe, wildly entertaining tale that takes a totally unexpected turn when Grogan washes up in sixties San Francisco and becomes a leader of the anarchist group known as the Diggers. The Diggers, devoted to street theater, direct action, and distributing free food, were in the thick of the legendary Summer of Love, and soon Grogan is struggling with the naive narcissism of the hippies, the marketing of revolution as a brand, dogmatic radicals, and false prophets like tripster Timothy Leary. Above all, however, he struggles with himself.

Ringolevio is an enigmatic portrait of a man and his times to set beside Hunter S. Thompson’s stories of fear and loathing, Norman Mailer’s The Armies of the Night, or the recent Chronicles of Bob Dylan, who dedicated his 1978 album Street Legal to the memory of Emmett Grogan.

Emmett Grogan (c.1943—1978) was born Eugene Grogan in Brooklyn, New York. Called a “Superman of the Underground” by The Times (London), he was the founder of the Diggers, a legendary anarchistic group in the San Francisco Bay Area during the 1960s that supplied free food, housing, and medical aid to runaways. On April 6, 1978, the thirty-five-year-old Grogan was found dead on a subway car in New York City, possibly of a drug overdose. Besides his autobiography, Grogan was the author of Final Score, a fictional crime novel.

Praise For Ringolevio: A Life Played for Keeps…

"Grogan was one of the figureheads of the West Coast movement in the mid Sixties and this book – some of which is true – charts his rise to infamy. The Diggers were devoted to genuine egalitarianism and involved themselves in street theatre, direct action and distributing free food. This is their story as much as Grogan’s and is one of the most fascinating books ever written about Sixties counterculture." —New Statesman

“The best and only authentic book written on the sixties underground.” –Dennis Hopper

“Of all those activists, Hopper thought the most interesting was the late Emmett Grogan, who ran the Diggers, a group that gave away food and clothing. Hopper thinks that Grogan's romanticized autobiography, Ringolevio, is the best book dealing with the '60s. The title was a New York street game ‘of life and death.’ ‘Grogan thought that anybody who ever played that game would learn their position in life,’ Hopper said. ‘He was out of New York, studied film making with Antonioni. He was a jewel thief, a heroin addict and then came to San Francisco and started the Diggers. He had a lot of charisma.’” –The San Francisco Chronicle

“Emmett Grogan was a wonderful storyteller, and Ringolevio is a great book.” –Jerry Garcia

“It wouldn’t be surprising if Emmett Grogan–‘60s underground hero, prime mover of the Digger movement in San Francisco–were to come back to life. To know Grogan–a wild phenomenon who made the world his stange and could strut more in a month than Olivier played in a lifetime–was to entertain such possibilities.” –The Boston Globe

“A kind of case study that reappraises the '60s unapologetically but honestly, noting the mistakes and excesses, but also acknowledging some of the things that came from it that we should be proud of. Most people are afraid to admit how much fun it was." –Peter Coyote

Grogan was “the underground superstar of the counterculture, a young man whom everyone who was hip had heard of but whom no one could ever find…Wherever it was happening in the 1960’s, Emmett Grogan was there.” –The New York Times

“This autobiography is at once an amazing example of romantic self-mythologizing and a broad history of the hippie movement of the late nineteen-sixties…Mr. Grogan writes so clearly that he almost convinces us that the whole story could be true.” –The New Yorker

“Grogan…who blends idealism with cold-blooded nastiness, sets forth in this playback not only his own life and times–but also what it means to be on the other side of the barricades, away from the hearth where the bowls aren’t always full…Grogan’s chronicle of his life in the Haight-Ashbury section of San Francisco…is most interesting.” –The New York Times Book Review

“The autobiography of a sometime saint…an astonishing mass of raw experience. It blows myths, settles scores and leaves one pondering the invisible rules by which history and individuals impinge upon one another.” –Life

“Superman of the Underground.” –The Times (London)

“Emmett Grogan is the nom de plume of a youthful author whose autobiography Ringolevio: A Life Played for Keeps will likely cause a stir when it is published.” –Publishers Weekly

“[The San Francisco Diggers] combined Dada street theater with the revolutionary politics of free. Slum-alley saints, they lit up the period by spreading the poetry of love and anarchy with broad strokes of artistic genius. Their free store, communications network of instant offset survival poetry, along with Indian-inspired consciousness, was the original white light of the era. Emmett Grogan was the hippie warrior par excellence. He was also a junkie, a maniac, a gifted actor, a rebel hero, …and above all a pain in the ass to all his friends. Ringolevio [is] half-brilliant.” –Abbie Hoffman