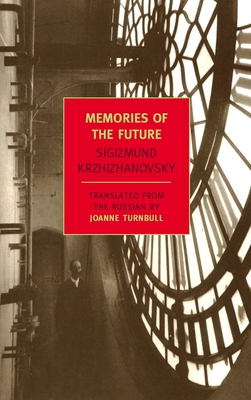 Memories of the Future (Paperback)

Written in Soviet Moscow in the 1920s—but considered too subversive even to show to a publisher—the seven tales included here attest to Sigizmund Krzhizhanovsky’s boundless imagination, black humor, and breathtaking irony: a man loses his way in the vast black waste of his own small room; the Eiffel Tower runs amok; a kind soul dreams of selling “everything you need for suicide”; an absentminded passenger boards the wrong train, winding up in a place where night is day, nightmares are the reality, and the backs of all facts have been broken; a man out looking for work comes across a line for logic but doesn’t join it as there’s no guarantee the logic will last; a sociable corpse misses his own funeral; an inventor gets a glimpse of the far-from-radiant communist future.

SIGIZMUND KRZHIZHANOVSKY (1887–1950), the Ukrainian-born son of Catholic Poles, studied law and classical philology at Kiev University. After graduation and two summers spent exploring Europe, he was obliged to clerk for an attorney. A sinecure, the job allowed him to devote the bulk of his time to the study of literature and his own writing. In 1920, after a brief stint in the Red Army, Krzhizhanovsky began lecturing intensively in Kiev on the theater and music. The lectures continued in Moscow, where he moved in 1922, by then well known in literary circles. Lodged in a cell-like room on the Arbat, Krzhizhanovsky wrote steadily for close to two decades. His philosophical and satirical stories with fantastical plots ignored official injunctions to portray the new Soviet state in a positive light. Three separate efforts to print different collections were quashed by the censors, a fourth by World War II. Not until 1989 could these surreal fictions begin to be published. Like Poe, Krzhizhanovsky takes us to the edge of the abyss and forces us to look into it. “I am interested,” he said, “not in the arithmetic, but in the algebra of life.”

JOANNE TURNBULL has translated a number of books from Russian—including Andrei Sinyavsky’s Soviet Civilization and Ivan the Fool, Asar Eppel’s The Grassy Street, and Andrei Sergeyev’s Stamp Album, and Sigizmund Krzhizhanovsky’s Seven Stories, winner of the 2007 Rossica Translation Prize—all in collaboration with Nikolai Formozov. She lives in Moscow.

"For anyone enthralled by the satirical avant-garde that briefly shone on the fringes of Soviet culture in the 1920s, here’s a revelation.  Krzhizhanovsky somehow scraped a living in post-revolution Moscow as he wrote stories infused by a disturbing surrealism.  Joanne Turnbull’s fine translations of seven won the Rossica Prize, and this edition should gain them a flock of new fans."  Boyd Tonkin, The Independent

"Fantastically imaginative, darkly ironic and marvelously crafted, these seven tales written in the 1920s were unpublished during Krzhizhanovsky&rsquo;s lifetime. Set mostly in Moscow, where the toilsome workdays sap spiritual strength, the stories are about the strange, wondrous and alarming things that can result from a chance encounter...Turnbull&rsquo;s translation reads wonderfully, capturing the isolation and strangeness of Krzhizhanovsky&rsquo;s startling stories." --Publishers Weekly

"Like Platonov, Krzhizhanovsky is a poker-faced surrealist whose imagination is so radical it goes beyond political lampoon into the realms of metaphysical assault. But Krzhizhanovsky&rsquo;s writing is more in the fantastical modernist mode of Jorge Luis Borges and Stanislaw Lem&ndash;he works out the eccentric premises of his plot with a relentless cogency..." --Bill Marx, WBUR.fm

"Krzhizhanovsky is often compared to Borges, Swift, Poe, Gogol, Kafka, and Beckett, yet his fiction relies on its own special mixture of heresy and logic...phantasmagoric..." --Natasha Randall, Bookforum

“Curiously, one of the most startling qualities of his work is the directness with which it addresses our 21st century concerns. It’s as if the Soviet editors were right: Krzhizhanovsky now seems more our contemporary than theirs...His stories, like those of Jorge Luis Borges, are closer to poetry and philosophy than to the realistic novel...It is now clear that Krzhizhanovsky is one of the greatest Russian writers of the last century.” –Robert Chandler, Financial Times

"Delightful to read, humorous, sad and meaningful...His work, subtly subversive, as his editor rightly calls it, only started to be published as a whole in 1989, when what might be described as all the usual suspects, Kafka and Borges, Swift, Gogol and of course Samuel Beckett, were promptly trotted out by way of comparison. Krzhizhanovsky has certainly much in common with them, but the flavour and personality of his writing is all his own, as if it were a subdued and friendly personal conversation. His method, as he put it, was not to borrow from reality, but to ask reality for permission to use his own imagination'." –John Bayley, The Spectator
or
Not Currently Available for Direct Purchase
Copyright © 2020 American Booksellers Association