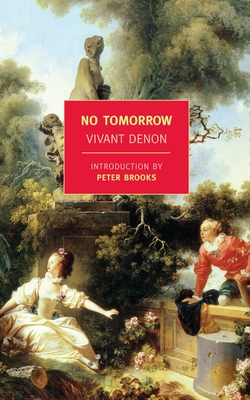 A Bilingual New York Review Books Original
Vivant Denon's No Tomorrow is one of the masterpieces of eighteenth-century French libertine literature, a book to set beside Choderlos de Laclos' Les Liaisons dangereuses, except that where Laclos' icy novel tells of hellish depravity, Denon's ravishing novella is a paradisal diversion. This tale of seduction is itself a seduction, with a plot that could be said to slowly unveil itself before arriving at last at an unexpected consummation.

Summoned by Madame de T—— to her country house, the young hero of Denon's novella is taken on a tour of the grounds, only the beginning of a night that not only will be full of unanticipated delights but will give rise to unforeseen, perhaps unanswerable, questions. Lydia Davis's definitive translation of Denon's slim masterpiece is accompanied by the French text. Peter Brooks's illuminating introduction explores the mysteries of No Tomorrow's original publication and the subtleties of Denon's ethics of pleasure.

Praise For No Tomorrow…

"One of the loveliest pieces of French prose." --Milan Kundera, The Art of the Novel

"A tale of adulterous love told with impeccable discretion. Balzac like it so much that he cited it in full in his Physiologie du mariage, warning off husbands while recommending it to bachelors as 'a delicious painting of manners of the last century." --The New Oxford Companion to Literature in French

Dominique Vivant Denon (1747-1825), a member of the minor French nobility, was born in Burgundy and sent to Paris to study law—a field he soon abandoned in order to pursue literature and art. After writing a play that enjoyed a small succcess, Denon became a favorite of Louis XV, who in 1769 put him in charge of Madame de Pompadour’s gemstone collection. Dispatched on various diplomatic missions to Russia and Sweden, Denon eventually joined the French embassy in Naples, where he spent seven years studying, etching, and collecting antiquities. The 1789 revolution put Denon’s life at serious risk, but he was protected by his friendship with the painter David, who employed him as a designer of costumes for revolutionary pageants. Denon allied himself to Napoleon and took part in the Egyptian campaign, making sketches of monuments that were later published in his Travels in Upper and Lower Egypt (1802), a book that helped to inspire the Egyptian Revival in the decorative arts. In 1804 Napoleon made Denon the director-general of museums and the head of the Musée Napoleon, and it was Denon who oversaw the assembly of the extraordinary collection, drawn by the Emperor’s armies from all over Europe, that remains central to today’s Louvre. Forced into retirement after Napoleon’s downfall, Denon turned to assembling an illustrated history of art, left unfinished at the time of his death but published posthumously.

Peter Brooks is the author of Henry James Goes to Paris, Realist Vision, Troubling Confessions, Reading for the Plot, The Melodramatic Imagination, and a number of other books, including the historical novel World Elsewhere. He taught for many years at Yale, where he was Sterling Professor of Comparative Literature, and currently is Andrew W. Mellon Scholar at Princeton.

Lydia Davis is an American author and translator of French. She is a Professor of Creative Writing at the University at Albany, SUNY.
or
Not Currently Available for Direct Purchase