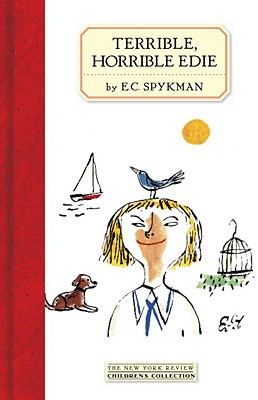 EVEN IF she has lived ten terrible years, terrible, horrible Edie really isn’t terrible and horrible at all, but rather one of the most charming and engaging and gutsy children in American children’s fiction. It’s true of course that Edie does get into—and not always without it being at least a little bit her fault—some pretty terrible and horrible scrapes, and that sometimes she will sulk, but these are the kinds of things that happen to the kid sister of two snooty boys and one fancy-pants girl, not to mention having to deal with the distraction of two half sisters who are no better than babies. Edie’s father and stepmother have headed to Europe for the summer, and though the rest of the family can look forward to good times at a beloved summer house on the sea, Edie still has to fight to hold her own. Adventures on a sailboat and on an island, and the advent of a major hurricane and what Edie takes to be a military coup, all come to a climax when Edie solves the mystery of who stole the neighbor’s jewels and saves, at least for one day, the day.

This story of Edie and the other members of the Cares family may remind readers of Arthur Ransome’s Swallows and Amazons, except that Edie has an experimental, even anarchic streak that is all her terrible, horrible own.

Elizabeth Choate Spykman (1896–1965) was born and raised in Southborough, Massachusetts, and was the fourth child in a family of four boys and two girls. Following her graduation from the Westover School in 1914, she traveled widely and adventurously, spending a year in Germany and another in England. In the 1920s, she wrote for The Atlantic Monthly, describing a journey to the South Seas by tramp steamer and life in small-town New England, among other subjects, but it was not until 1955 that she published a book, A Lemon and a Star, the first of four novels about the Cares family, which include The Wild Angel (1957), Terrible, Horrible Edie (1960), and Edie on the Warpath (1966). Elizabeth Choate Spykman was married to the co-founder of Yale’s Department of International Relations, Nicholas J. Spykman, with whom she had two daughters.

"First released in 1960, this book is able to reach a new audience thanks to its publication as part of the New York Review Books Children's Collection...the writing is lively and the events interesting...Great summer reading for ages 8 to 12." --Ottawa Citizen

“Ten-year-old Edie, rebellious, independent, is the mastermind for many breathtaking episodes, which keep her in trouble and everyone else on tenterhooks. Delightful reading.” --Parents Magazine

“Here is a new family as warm as Eleanor Estes’s Moffats, as full of reasonable ingenuity as the Swallows and the Amazons, and as painfully individualistic as Enid Bagnold’s Alice, Thomas, and Jane.” --Saturday Review

“Here …is a story whose good writing, superb characterization, and high sense of the adventure of living make it as a must reading for boys and girls of 10 and up.” -The Chicago Tribune

“When Edie breaks out, there is always plenty of excitement…these episodes ring true…funny, poignant, and tender.” -Ellen Lewis Buell, The New York Times

“The most entertaining family in literature since the Bastables, the Cares of Summerton, Massachusetts, are in absolutely top form in this, the third book in a series about them.” -New York Herald Tribune

“The four Cares children [are] probably the most uninhibited youngsters in fiction since Richard Hughes wrote The Innocent Voyage.” -Ellen Lewis Buell, The New York Times