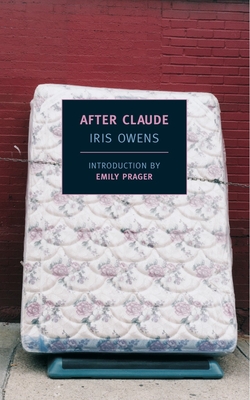 Harriet is leaving her boyfriend Claude, “the French rat.” That at least is how Harriet sees things, even if it’s Claude who has just asked Harriet to leave his Greenwich Village apartment. Well, one way or another she has no intention of leaving. To the contrary, she will stay and exact revenge—or would have if Claude had not had her unceremoniously evicted. Still, though moved out, Harriet is not about to move on. Not in any way. Girlfriends circle around to patronize and advise, but Harriet only takes offense, and it’s easy to understand why. Because mad and maddening as she may be, Harriet sees past the polite platitudes that everyone else is content to spout and live by. She is an unblinkered, unbuttoned, unrelenting, and above all bitingly funny prophetess of all that is wrong with women’s lives and hearts—until, in a surprise twist, she finds a savior in a dark room at the Chelsea Hotel.

Iris Owens (née Klein) (?–2008) was born and raised in New York City, the daughter of a professional gambler. She attended Barnard College, was briefly married, and then moved to Paris, where she fell in with Alexander Trocchi, the editor of the legendary avant-garde journal Merlin and a notorious heroin addict, and supported herself by producing pornography (under the name of Harriet Daimler) for Maurice Girodias’s Olympia Press. Back in the United States, Owens wroteAfter Claude, which came out in 1973. A second novel, Hope Diamond Refuses, loosely based on her marriage to an Iranian prince, was published in 1984.


Emily Prager is a novelist, a Literary Lion of the New York Public Library, and the winner of the Columbia Graduate School of Journalism 2000 Online Journalism Award for Commentary. She is at work on a book of essays for Random House, entitled Secrets of Shanghai.

Praise For After Claude…

"Like our best women writers (Joan Didion, Joyce Carol Oates), Owens is not afraid to take risks...Owens is a highly intelligent writer and a fiendishly sardonic one--to the extent that her outrageous wit rescues her freaky Jewish anti-heroine from becoming a pain in the Asphalt Jungle. On every page wisecracks explode like anti-personnel mines. We laugh, nervously perhaps, but often."  —Newsweek

“One of the earliest portraits of the female antihero, a sort of distaff Notes From Underground. It was very funny” —Anatole Broyard, The New York Times

“A very funny book by a exhilarating talent.” —The New York Times

“…like watching a woman depilate with an acetylene touch.” —Newsweek

“Owens, under the name of Harriet Daimler, was a prominent Parisian pornographer for Olympia Press…[who] as 'Harriet Daimler', became one of Girodias's most celebrated pornographers, someone who struggled 'against her impossible tendency to write more explicitly than the courts will tolerate’” —Bloomsbury Magazine

“To characterize After Claude as the inevitable lightly veiled autobiography of a ‘first’ novel is to deny Ms. Owens her due both as a  savagely accurate reporter of the current Greenwich Village-Chelsea Hotel scene, and as a gallow humorist of major order...After Claude...is said, with biting verve and accuracy for New York that Mary McCarthy and her reliance on ‘facts’ would well envy.” —Eleanor Rackow Widmer, Arts and Society

“After Claude is a very funny book saved from off-putting vulgarity by an exhilarating talent and intelligence...” —Leonard Michaels, The New York Times Book Review

“Miss Owens has created a new kind of monster for your compassion. And isn't that, after all, one of the classical functions of contemporary fiction?” —Anatole Broyard, The New York Times

"Novels like Fear of Flying and After Claude created a fresh voice that made us want to laugh out loud, pass the book around, read funny bits to our friends."  —Morris Dickstein, The New York Times

“Harriet tells her story like a female Lenny Bruce…while I was reading…I was laughing too hard to see the page.” —John Lahr, Women’s Wear Daily
or
Buy Here
(This book is on backorder)
Copyright © 2020 American Booksellers Association